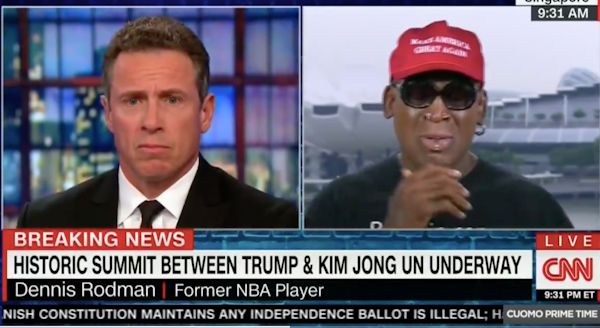 When the history of the groundbreaking meeting between Donald Trump and Kim Jong Un is written, pride of place will be given to the role played by basketball great Dennis Rodman, at least if CNN is to be trusted. The cable news network had Rodman on for an inordinate length of time.

Interviewed by Chris Cuomo, Rodman told the story of how he first visited Pyongyang in 2013 and fell in love with North Korea. Since then, Rodman has tried to act as a bridge between America and isolated communist dictatorship, often earning derision and contempt for his ad hoc diplomacy.

The interview made for gripping television:

Yet however riveting for viewers, it’s hard to see how this helped clear up an already fairly nutty summit. CNN appears to be following a ratings-at-all-costs model. As former New York Observer editor Elizabeth Spiers rightly noted, it calls to mind the way the network gave Donald Trump endless free air time during the 2016 election: