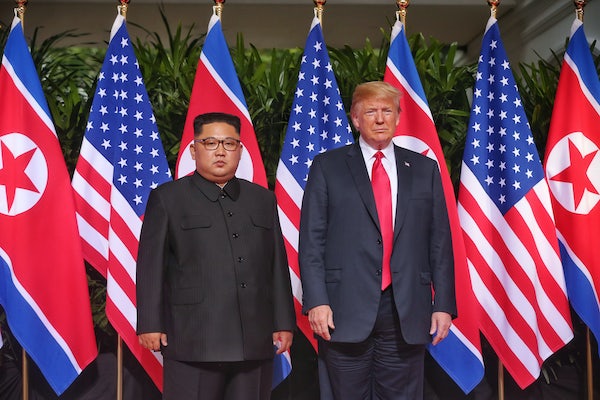 The North Korean and American flags share the color pattern of red, white, and blue. They also both feature stars (or rather, one star in the North Korean case) and stripes. The similarities are hard to ignore as the two flags of these enemy nations fly side by side in Singapore.

For some American nationalists, the sight of Old Glory keeping company with the North Korean flag is deeply upsetting.

Neera Tanden, president of the Center for American Progress, lodged a similar complaint:

These objections seem misdirected. After all, North Korea and the United States are having a summit, so it’s natural for flags to fly there. There might be a case for avoiding contaminating the American flag with the emblem of an odious regime if it is done for purely gratuitous reasons. The 1936 Olympics, where the American flag kept company with the Nazi swastika, is a prime example. In retrospect, America should have boycotted that Olympics.

But if you are going to hold a summit, then the flying of flags is necessary. Perhaps Goldberg and Tanden don’t want a summit at all. If so, that should be the focus of their complaints, not the flags.

On the flags issue, journalist Tim Shorrock’s argument is hard to dispute: