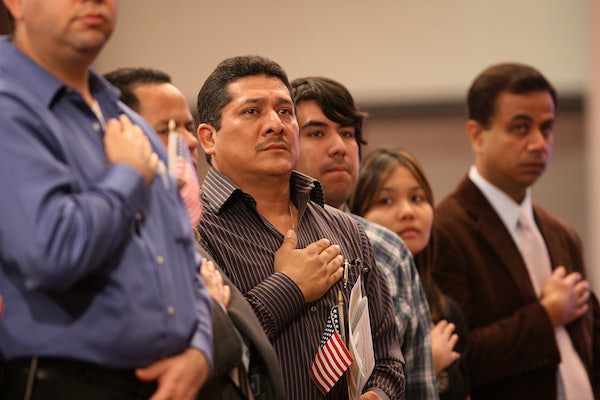 Can the Trump administration legally strip immigrants of citizenship?

L. Francis Cissna, the director of U.S. Citizenship and Immigration Services, said that his agency is staffing up a new office focused on denaturalization, the Associated Press reported on Tuesday. It’s an aggressive approach to a legal power that the federal government rarely exercises.

Until now, the agency has pursued cases as they arose but not through a coordinated effort, Cissna said. He said he hopes the agency’s new office in Los Angeles will be running by next year but added that investigating and referring cases for prosecution will likely take longer.

“We finally have a process in place to get to the bottom of all these bad cases and start denaturalizing people who should not have been naturalized in the first place,” Cissna said. “What we’re looking at, when you boil it all down, is potentially a few thousand cases.”

The Trump administration has ramped up enforcement of immigration laws at nearly every turn. But some of the citizenship system’s issues also predate his presidency: In 2016, the Department of Homeland Security’s inspector general found that at least 900 people who had been previously deported later acquired citizenship thanks to flaws in the system for tracking fingerprint records.

There’s a dark history to large-scale revocations of citizenship in other countries, but it’s extremely difficult for the U.S. government to do so. There’s no lawful way to deprive a natural-born American of citizenship. Naturalized Americans can only lose it if they lied during the naturalization process, and even then, there are limits. The Supreme Court unanimously ruled last year that not all lies would be grounds for denaturalization—only those that helped the person to get citizenship. So the Trump administration couldn’t use simple errors or harmless falsehoods as reasons for stripping anyone of citizenship.