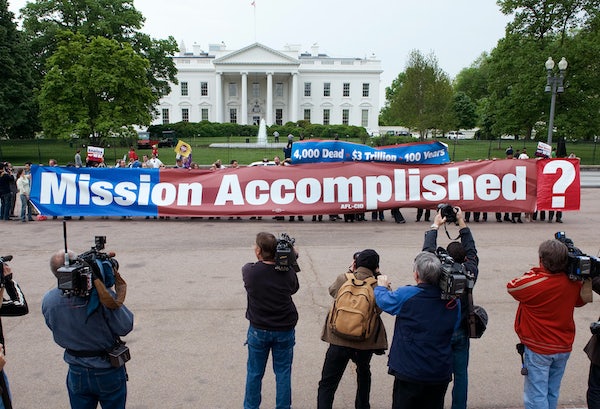 It is perilous for a president to declare victory prematurely, as George W. Bush found out when he was photographed on May 1, 2003 on the aircraft carrier USS Abraham Lincoln with the sign “Mission Accomplished” behind him. Since the war in Iraq continued for the duration of Bush’s presidency, the words “mission accomplished” were constantly thrown back at Bush as evidence of his feckless bravado.

On Wednesday morning, President Donald Trump gambled on his own “Mission Accomplished” moment by tweeting:

For a normal president, this is a treacherous gambit. After all, what would happen if, as is quite possible, talks with the North Korean regime collapse?

But while he was in Singapore, Trump already indicated he had a Plan B. As a Trump conference on Tuesday, Trump said “I may be wrong, I mean I may stand before you in six months and say, ‘Hey I was wrong,’ I don’t know that I’ll ever admit that, but I’ll find some kind of an excuse.”

Trump has a clear path no matter what happens. He is claiming victory and hope it works out. If negotiations fail, he’ll come up with an excuse.

In truth, given the partisan blinkers of supporters like Hewitt, Trump has little to worry about. The president can not only conjure up an excuse for any failure but he can even admit that it’s an excuse and still be hailed for his honesty. Trump is playing a game he can’t lose.