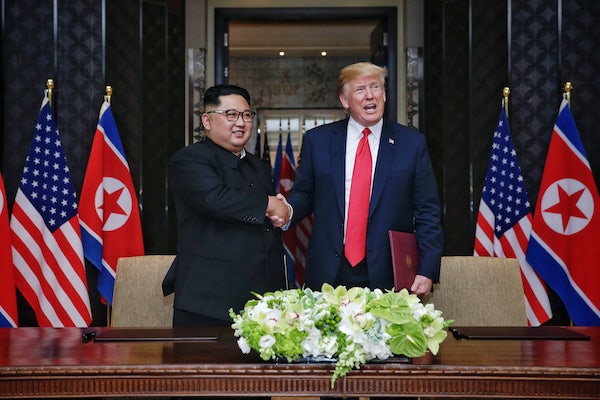 Interviewed by Bret Baier of Fox News on Friday, the president brushed aside criticism of North Korean dictator Kim Jong Un’s human rights record. ““Hey, he’s a tough guy,” Trump said. “When you take over a country — a tough country, tough people — and you take it over from your father, I don’t care who you are, what you are, how much of an advantage you have. If you can do that at 27 years old, I mean, that’s one in 10,000 that could do that. So he’s a very smart guy. He’s a great negotiator.”

Pressed on the crimes Kim has committed, Trump took a stance of moral relativism. “Yeah, but so have a lot of other people have done some really bad things,” he argued. “I mean, I could go through a lot of nations where a lot of bad things were done.”

Trump’s words, of course, follow a familiar pattern of the president openly praising authoritarian leaders for their strength and toughness. They echo his earlier comments on autocrats like Russia’s Vladimir Putin and China’s Xi Jinping.

But there is something more personal going on with Trump’s comments. Like Trump himself, Kim was handed his position in society. Kim’s grandfather was the first Supreme Leader of North Korea and his father the second Supreme Leader. Trump also, despite the self-made man mythology he sometimes alludes to, belongs to a family that has been prosperous for three generations.

Senator Marco Rubio slyly alluded to these similarities in a tweet:

The words Trump used to describe Kim are similar to Trump’s own account of himself: “You take it over from your father, I don’t care who you are, what you are, how much of an advantage you have.” In defending Kim from the accusation of having benefited from his family, Trump is also defending his own claim to have merit aside from inheritance. Trump and Kim are both examples of dynastic politics, which might explain why they can get along so well.