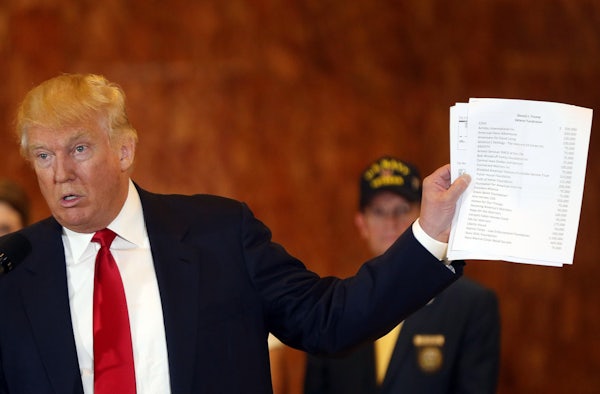 That’s how New York Attorney General Barbara Underwood described the Donald J. Trump Foundation in a lawsuit filed on Thursday. The lawsuit seeks to dissolve the foundation, bar Trump from serving on another charity’s board for ten years, and force him to pay at least $2.8 million in penalties. In a series of tweets, Trump vowed not to settle the state’s lawsuit.

The alleged grift is extensive: New York’s 41-page lawsuit accuses Trump and his eldest children—Donald Jr., Ivanka, and Eric—of violating state and federal laws for more than a decade by using the foundation’s tax-exempt coffers as a personal expense account of sorts. In perhaps the most egregious breach, Trump sought donations from the public at a 2016 Iowa fundraiser for veterans’ groups and then funneled roughly half of the proceeds to the foundation. The Trump campaign then drew upon those funds to make high-profile donations during the Iowa caucuses in the foundation’s name, effectively giving him a political boost for charitable giving made with other people’s money.

One can’t help but be reminded of another one of the president’s Potemkin enterprises: Trump University, which marketed real-estate learning courses using its namesake’s reputation for business acumen in the 2000s. Class-action lawsuits brought by former customers depicted Trump University as a predatory scheme that sought to inflame those customers’ financial insecurities, then offered to soothe them if they paid tens of thousands of dollars for real-estate seminars that yielded few insights into long-term success. (Trump settled the lawsuits for $25 million last year.)

The two schemes differ in targets and tactics, but share a common goal: shameless self-enrichment, obscured by the thinnest veneer of legitimacy, facilitated by Trump’s public image of wealth and success and conducted without regard for ethical or legal boundaries.