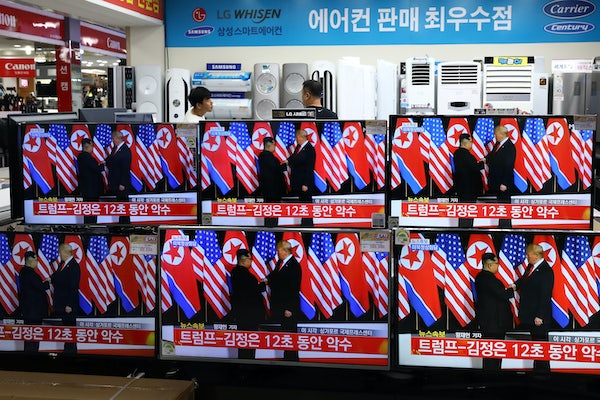 Does it matter if Trump has a North Korea strategy?

Donald Trump’s presidency has a Rorschach test quality, a series of splotches that could form a pattern if the viewer really wants to see one. One of the unresolved questions of the Trump era is whether there is a method to Trump’s madness. Do his often incoherent and contradictory words and actions add up to a strategy, or is the president just winging it?

Trump’s Korean gambit has re-opened the debate, provoking two politically opposed pundits (the progressive Adele M. Stan and the conservative Ross Douthat) to making intelligent arguments for Trump having a coherent policy. Writing in The American Prospect, Stan argues that underlying both Trump’s alienation of the G-7 allies and his aggressive pursuit of a deal with North Korea is an admiration for authoritarianism. “We’re in the grips of a shift in national identity, one in which democracy and adherence to human rights as stated national values (however flawed in their actual execution) are giving way to an acceptance of authoritarian rule,” Stan contends.

In his New York Times column, Douthat suggests a very different underlying strategy. Trump, Douthat claims, is “seeking to extricate the United States from some of its multiplying commitments, to shift our post-Cold War position away from a Pax Americana model of peace-through-hegemony and toward an ‘offshore balancing’ approach that makes deals with erstwhile enemies and makes more demands of longtime friends.” (Offshore balancing referring to the idea that America could pursue its goals not by direct intervention but by playing different nations off each other.)

Although coming from very different angles, it’s possible to reconcile these two viewpoints. Trump’s alleged retreat from Pax Americana could easily be motivated not by just by a desire for offshore balancing but by an admiration, rooted in instinctive authoritarianism, for traditional hostile powers like North Korea, Russia or China.

But perhaps Stan and Douthat are giving Trump too much credit. After all, much of the president’s behavior looks more like a flying-by-the-seat-of-his-pants con-man trying to keep hustle going than a Metternich-like grand strategist. His decision to pull out of the G-7 communique, for example, seems to have been a spur-of-the-moment decision fueled by personal pique which took his staff by surprise.

It is not necessary to credit Trump with any deep strategy (whether authoritarianism or offshore balancing) to find meaningful patterns in his actions. After all, if he’s working on impulse, his instinctive actions will never be random: they’ll still follow recurring patterns based on his character. Among those instincts could be warm feelings about strongmen and an inbred hunch that allies are actually taking advantage of America. These feelings are all the more powerful if they are inchoate, existing at the level of inarticulate assumptions rather than coherent doctrine. Whether we want to dignify these patterns with the label of a strategy is largely a semantic question.