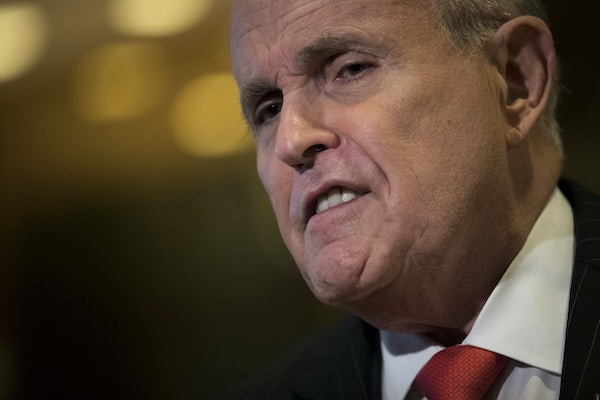 On Thursday night, the president’s lawyer appeared on Fox News and used the newly released inspector general’s report critical of the FBI’s handling of the 2016 election to launch a two-fisted attack on Donald Trump’s political enemies. “I believe that Rod Rosenstein and Jeff Sessions have a chance to redeem themselves and that chance comes about tomorrow,” Giuliani ranted, referring to the Deputy Attorney General Rosenstein and Attorney General Jeff Sessions. Their path to redemption, Giuliani asserted, comes from punishing special counsel Robert Mueller and FBI agent Peter Strzok, who was revealed to have made critical remarks about candidate Trump duing the 2016 election, including, “We’ll stop it” (referring to Trump’s election).

“Tomorrow, Mueller should be suspended and honest people should be brought in, impartial people to investigate these people like Strzok,” Giuliani continued as he talked to Fox host Sean Hannity. “Strzok should be in jail by the end of next week.”

It’s not clear why Giuliani wants to jail Strzok since criticizing a political candidate is not a crime. According to the inspector general’s report, Strzok made inappropriate comments but they did not influence his actions as an agent.

If Trump follows Giuliani’s advice, the United States would be engulfed in the biggest constitutional crisis since the Saturday Night Massacre of 1973 when Richard Nixon ordered the firing of special counsel Archibald Cox (an act that also led to the resignation of the attorney general and deputy attorney general).

It’s by no means clear, though that Trump will heed Giuliani’s dangerous counsel. Giuliani often seems to function more as a television bulldog, barking at the president’s enemies, than a lawyer. If Trump were wise, he’d keep Giuliani as merely a performing creature, not a guide to legal strategy.