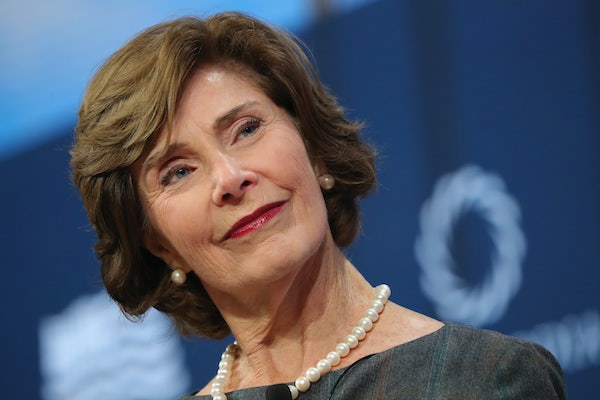 On Sunday the former first lady published an unusually scathing column in The Washington Post condemning the Trump administration’s “zero-tolerance” policy towards border crossers. “In the six weeks between April 19 and May 31, the Department of Homeland Security has sent nearly 2,000 children to mass detention centers or foster care,” Bush noted, “I appreciate the need to enforce and protect our international boundaries, but this zero-tolerance policy is cruel. It is immoral. And it breaks my heart.” Bush added that images of children jailed by this policy “are eerily reminiscent of the Japanese American internment camps of World War II, now considered to have been one of the most shameful episodes in U.S. history.”

These are exceptionally tough words for a former first lady, especially when speaking about the policies carried out by a president of her own party. Trump’s zero-tolerance policy is unpopular with the public at large (56 percent of whom oppose it as against 27 percent who approve) but has a support of a plurality of Republicans (46 percent approving as against 32 percent disapproving). These numbers explain why Republicans lawmakers have either been silent about the policy or have only had muted criticism. Even Maine Senator Susan Collins, a reputed moderate, offset her criticism of the administration with an unwillingness to support a Democratic sponsored bill to stop the policy.

It’s uncertain whether Bush’s words can change the opinion of a substantial number of Republicans. She has enjoyed high approval ratings, in the neighborhood of 70 percent public support or more. But surely some of that approval comes from being an apolitical public figure, less prone to taking stands on contentious issues than most recent first ladies. By making such a bold statement against the policy of her own party, Bush threatens to undermine her own status as a widely loved figure.

Also working against Bush’s efforts to convince Republicans is that the faction of the party she belongs to, the Bush family, is now on the wane as a political force. One of the factors driving Trump’s popularity among Republicans is his rejection of the pretenses of Bushian “compassionate conservatism.” Instead, Trump offers raw, unvarnished right-wing policy goals, which includes using cruel methods to stop the flow of undocumented immigrants. In the age of Trump, Laura Bush might be a voice most Republicans no longer respect or heed.