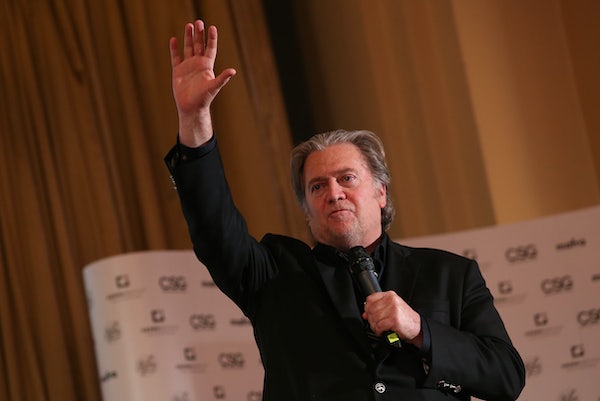 Bannonism without Bannon has triumphed in the White House.

At the beginning of the year, Steve Bannon’s political exile seemed complete. The previous summer, Bannon had been elbowed out of his job as White House adviser. Then, after revelations that he had slagged Donald Trump Jr. and Jared Kushner as “treasonous” when talking to reporter Michael Wolff, Bannon stepped down from his position as CEO of Breitbart. Since then, Bannon has been persona non grata in the Republican world, dismissed by his former boss as “Sloppy Steve.”

But if Bannon now has no formal power, his ideas still seem to be dominant in Trump’s White House. As Washington Post editorial page editor Fred Hiatt noted in a Monday column, “Truculent, anti-immigrant nationalism; disdain for the ‘deep state’; disparaging democratic allies while celebrating dictators: These are now the pillars of President Trump’s rule. In his administration’s policy, foreign and domestic, and in the compliant Republican Party, Bannonism is ascendant.”

Bannon himself seems to be on a bit of a victory tour, giving prominent interviews, perhaps with a view toward rehabilitating himself with the president. Possibly with that goal in mind, Bannon, in a Sunday interview with ABC News, made the remarkable claim that Donald Trump has never lied:

If Bannonism continues to have a robust afterlife, it’s in part because he still has some prominent fellow travelers inside the White House pushing his agenda, figures like Stephen Miller, Julia Hahn, and Peter Navarro. But more importantly, the very scandal that got Bannon into hot water is keeping his ideas alive. Trump turned against Bannon because Bannon had suggested Robert Mueller’s Russia investigation might ensnare members of the Trump family. But as the Russia investigation heats up, Trump needs to keep the loyalty of the GOP base. Given that Trump won the GOP nomination in 2016 by distinguishing himself from mainstream Republicans, the only way to keep the GOP base happy is with the red meat of Bannonism: trade wars and immigration bashing. As his administration sinks in scandal, Trump will cling all the more tightly to Bannonism.