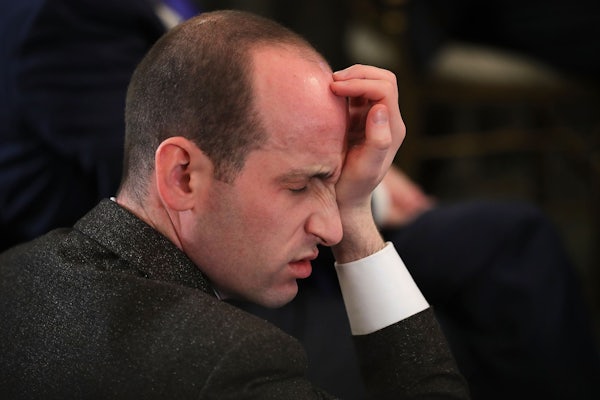 Donald Trump’s crackdown on immigration is just warming up.

Even as the White House’s policy of separating families crossing the border is facing intense political opposition, including a rising chorus of dissent in President Donald Trump’s own party, the commander in chief is reportedly set on provoking more immigration fights. Trump and his staff believe that immigration is the issue most likely to excite the Republican base for the fall midterms.

To score some wins that they can earn goodwill from that base, Trump has tasked his policy adviser Stephen Miller, perhaps the foremost anti-immigration advocate in the administration, to come up with quick policies that can be enacted. As Politico reports, the proposals Miller is putting forward include “tightening rules on student visas and exchange programs; limiting visas for temporary agricultural workers; making it harder for legal immigrants who have applied for any welfare programs to obtain residency; and collecting biometric data from visitors from certain countries.”

Trump’s desire to put all his political eggs in the the basket of anti-immigration policy rests on the fact that he has precious little else to run on. His major legislative achievement, the tax cut, still doesn’t poll well. Trump himself has had great success with immigrant-bashing in the one election season he ran as a candidate, 2016.

The New York Times reported on tension between Trump and his party on this issue, with elected GOP officials wary of immigration as a midterm wedge issue. “Republicans typically handle immigration gingerly in an election year, as they try to appeal to Hispanic voters, independents and moderates across divergent districts,” the Times notes. “But with more Americans still opposing the tax measure than supporting it, Mr. Trump’s allies believe that trying to link Democrats to crimes committed by undocumented immigrants and gangs like MS-13 will do more to galvanize Republican voters and get them to the polls in November than emphasizing economic issues.”

Corey Lewandowski, the former campaign manager who still has the president’s ear, is a major advocate of this policy, telling the Times that, “If you want to get people motivated, you’ve got to give them a reason to vote. Saying ‘build the wall and stop illegals from coming in and killing American citizens’ gives them an important issue.”

While Trump in the past has shown uncanny political instincts for how the GOP thinks, it’s by no means clear that immigration will be a winning issue for the Republicans in the midterms. The congressional GOP is rightly nervous about the issue because Trump’s position is particularly unpopular among college educated suburban voters, who have been trending towards the Democratic Party in special elections.

As Nate Silver of FiveThirtyEight notes, even the popularity of anti-immigration policy among Republicans is a narrow one:

Trump is trying to use the old xenophobic magic of 2016 but he might find it has lost its potency in 2018.