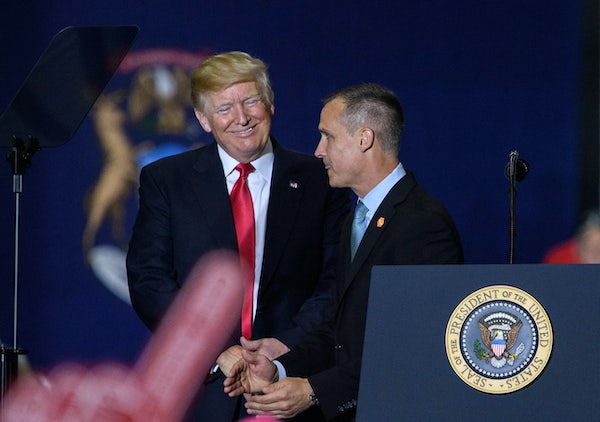 On Tuesday, Mexico’s Foreign Affairs Secretary Luis Videgaray told the press that a ten-year-old girl with Down syndrome was separated from her mother at the border as a result of President Donald Trump’s zero-tolerance policy. Democratic Party strategist Zac Petkanas raised the case on Fox News in a debate with Corey Lewandowski, former campaign manager to Donald Trump.

Lewandowski responded by going “womp, womp” and rolling his eyes.

“Did you just say ‘womp, womp’ to a 10-year-old with Down syndrome separated from her mother?” Petkanas asked. The conversation quickly devolved into chaos a the two men furiously talking over each other.

In his obdurate cruelty in sticking to the party line of the moment as well as his childish reliance on sound effects, Lewandowski became the perfect emblem of Trump’s immigration policy.

Lewandowski was fired from the Trump campaign after manhandling a reporter in 2016. But he remains a hanger on in the Trump circle, one of the cronies the president calls and relies on as a advocates on cable news. Lewandowski is also, as William Kristol of the Weekly Standard notes, a well-connected GOP consultant:

Lewandowski can’t be dismissed as a fringe figure. Rather, as in the “womp womp” moment, he’s a representative figure of the presidency and its driving impulses of gratuitous meanness.