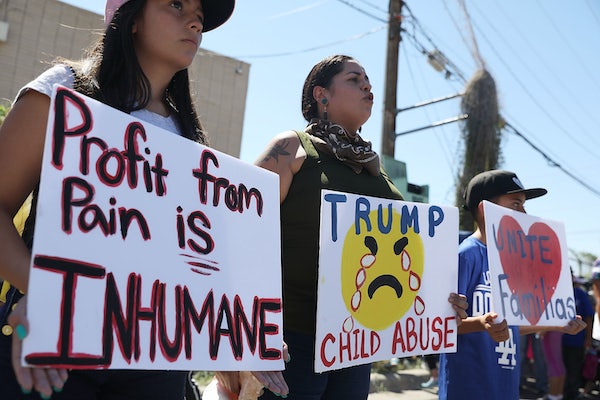 The Trump administration is jailing babies.

On Tuesday, new evidence emerged that the migrant children being separated from their parents at the border could be as young as three months old. “Trump administration officials have been sending babies and other young children forcibly separated from their parents at the U.S.-Mexico border to at least three ‘tender age’ shelters in South Texas,” The Associated Press reported. “Lawyers and medical providers who have visited the Rio Grande Valley shelters described play rooms of crying preschool-age children in crisis. The government also plans to open a fourth shelter to house hundreds of young migrant children in Houston, where city leaders denounced the move Tuesday.”

Aside from “tender age” shelters, the other euphemism used by government officials to describe these holding pens is “permanent unaccompanied alien children program facilities.”

The Associated Press reporting was reinforced by a statement from Agustin V. Arbulu, Executive Director of Michigan Department of Civil Rights, that very young children ensnared in the policy were being sent to Michigan. “This week, I have been in touch with various agencies and organizations working with these vulnerable children,” Arbulu wrote. “We have received reports and are very concerned that the children arriving here are much younger than those who have been transported here in the past. Some of the children are infants as young as three months of age and are completely unable to advocate for themselves.”

The two reports reinforce the fact that the Trump administration is creating a situation that is causing unfathomable and far-reaching harm.