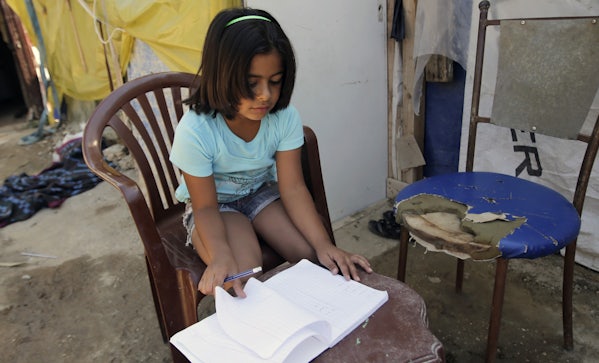 Some years, June 20 has passed with relatively little fanfare. This year, it comes amid the ongoing refugee crisis in Europe and the Trump administration’s policy of separating child migrants from their parents. In honor of this day, here are some of the most thought-provoking articles on refugee issues on our reading lists, from both The New Republic and elsewhere.

As a psychiatrist and psychologist point out in The Atlantic, part of the danger of Trump’s family separation policy is that this is not the first trauma these children have been exposed to:

A growing scientific literature is identifying the multitude of stressors to which migrant children from Central America are exposed, whether with or without their parents: victimization in their home countries by gangs who have turned the region into one of the most violent in the world; a perilous journey north along migration routes patrolled by the same gangs who have hounded them from their home countries; detention in frequently inhumane conditions upon their arrival in the United States; and an agonizing period of limbo while they await adjudication of their immigration cases. Each successive traumatic experience increases children’s likelihood of experiencing psychological problems.

The Horror of Australia’s Detention Centers

A 2016 article in Foreign Policy explored Australia’s attempt to funnel asylum seekers into “inhumane facilities” in Papua New Guinea and Nauru. “It took Australian immigration officials six months to establish a refugee processing system for Nauru, but it wasn’t until May 2014 that the first 13 asylum seekers were recognized as refugees and granted five-year temporary visas to settle in Nauru,” Mark Isaacs wrote. “The lives that awaited them there were bleak: there were few jobs, little economic activity, rampant discrimination, and numerous allegations of rape and assault.”

The Economist has published several pieces on how countries can integrate refugees. In Uganda, refugees have been given plots of land to farm, and welcomed into the labor market. The system isn’t perfect, but it’s furnished some interesting takeaways. Allowing migrants to work might not only be more humane, but also more effective than sending aid to try to stem migrant flows, which could paradoxically increase migration if “potential migrants gain the means to pay smugglers.”

The New Yorker last year explored the influence of a single White House adviser: “How Stephen Miller Single-Handedly Got the U.S. to Accept Fewer Refugees.” Incidentally, it’s also a terrifying look at how a little bureaucratic understanding can go a long way in some administrations. “The reason Stephen Miller is so dangerous?” a White House official told Jonathan Blitzer. “He’s clearly got a vision. He knows about narrative, about messaging. He’s figuring this out.”

The Climate’s Role in Refugee Crises

Climate refugees are a growing category as extreme weather events increase, possibly displacing 143 million people by 2050, according to the World Bank. NPR’s “Goats and Soda” blog explains why “climate refugees pose a number of unique challenges for international policymakers,” and what can be done about it. “The situation and scope of this problem is entirely new, and of biblical proportions,” Steve Trent, executive director of the Environmental Justice Foundation, told NPR. “It demands an entirely new legal convention. The global compacts are a start, but it’s clear that they’re not enough.”

Although gender is the basis for violence and even murder in many places around the world, there’s not much protection for gender-based violence in asylum law. Writing recently in The New Republic, two different lawyer-journalists looked at how this has been playing out. In France, a seemingly gender-neutral refugee policy has had horrifying consequences for women, who often face sexual violence while going through the asylum process. In the U.S., Attorney General Jeff Sessions recently ruled that domestic abuse would no longer be considered grounds for asylum. That’s disastrous for women seeking to escape abusers in other countries, but also impacts women in the U.S., Rafia Zarkaria argues: “All American women now live in a country with an Attorney General who doesn’t believe wife-beating has to do with gender.”