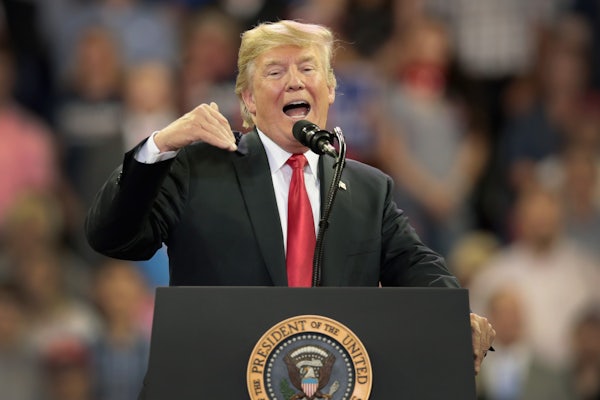 Friends and foes alike have labelled President Donald Trump a populist, but the moniker has always fitted him uneasily. Populism comes in many forms, but usually a key component is a mass movement that springs up from ordinary people who try to overturn an established hierarchy. This has been as true of right-wing populism (Father Charles Coughlin and George Wallace) as left-wing populism (William Jennings Bryan, Bernie Sanders).

Trumpism, by contrast, seemed more focused on Trump, specifically, being the one to deliver the promised land (“I alone can fix it,” as he famously said in the 2016 Republican convention). While Trump can mouth the classic populist tropes about a globalist elite undermining the common people, there’s very little space in Trumpism for the masses gaining agency through political action.

Speaking at a rally in Duluth, Minnesota, on Wednesday night, the president made a statement that shed light on the peculiar qualities of his political philosophy. “They always call the other side, and they do this sometime, ‘the elite.’ The elite!” he mocked. “Why are they elite? I have a much better apartment than they do. I’m smarter than they are. I’m richer than they are. I became president and they didn’t. And I am representing the greatest, smartest, most loyal people on earth, the deplorables.”

Unpacking Trump’s statement, it turns out he’s not, as populist heroes traditionally have been, the avatar or even the tribune of the common man. Rather, Trump is the true elite, a caste of one, the übermensch who is smart, rich, and able to become president. His followers, meanwhile, are “the deplorables” who are, pointedly, not elite in Trump’s manner but have their own form of greatness and smartness which is displayed in their willingness to subsume themselves (“the most loyal people on earth”) to Trump.

This is not the creed of populism, but of the strong man with an army of loyal followers. It helps explain why the economic populism Trump occasionally voiced (as with his attacks during the campaign on the banks) has mostly not been enacted. Trump was never selling populism per se but rather a faux-populism that masked a defense of aggrieved privilege, with the selling point being that Trump was the tough guy who could protect the social status quo his followers loved.