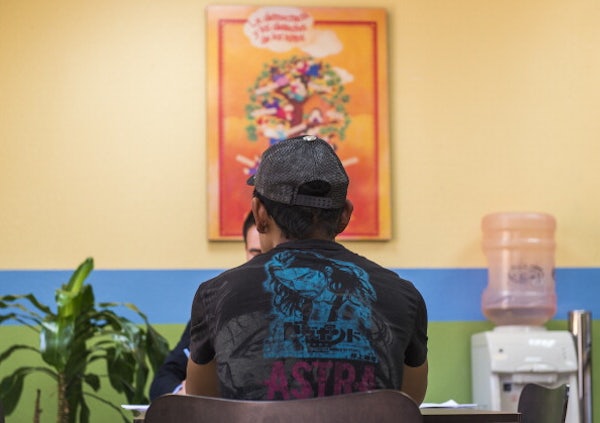 Another nightmare report about the treatment of immigrant children.

An investigative report by the Associated Press reveals widespread abuse at Shenandoah Valley Juvenile Center in Virginia, where children as young as 14 claim they were tied to chairs with bags over their heads, “beaten while handcuffed and locked up for long periods in solitary confinement, left nude and shivering in concrete cells.”

A former child-development specialist told the AP she visited children with broken bones and bruises that they attributed to the guards. One Honduran immigrant, who was 15 years old at the time, recounted in an affidavit: “Whenever they used to restrain me and put me in the chair, they would handcuff me. Strapped me down all the way, from your feet all the way to your chest, you couldn’t really move. ... They have total control over you. They also put a bag over your head. It has little holes; you can see through it. But you feel suffocated with the bag on.”

Kelsey Wong, a program director at the center, told the AP that “youth were being screened as gang-involved individuals. And then when they came into our care, and they were assessed by our clinical and case management staff ... they weren’t necessarily identified as gang-involved individuals.” Many had been accused by U.S. immigration authorities of belonging to violent gangs, like MS-13, whom Trump has called “animals.”

Shenandoah received $4.2 million in government funding last year, enough, the AP claims, to cover two-thirds of the operating costs. Still, children were reportedly given cold food and small portions that left them hungry; some claimed they had never been outside, and multiple accounts in the lawsuit claim staff would jeer at Latino children using racist slurs like “onion head” and “wetback.”