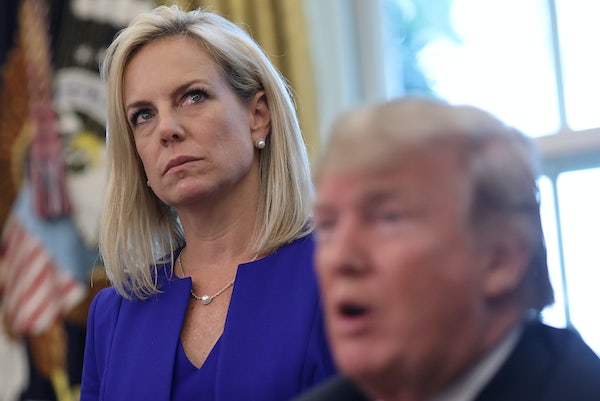 The New York Post reports that White House advisor Stephen Miller became the second Trump administration official to be ridiculed at a Mexican restaurant this week when he dined at Espita Mezcaleria on Wednesday. A fellow customer spotted Miller, one of the chief architects of the family separation policy, and shouted “Hey look guys, whoever thought we’d be in a restaurant with a real-life fascist begging [for] money for new cages?” Miller reportedly “scurried” away from the protester, although he stayed in the restaurant.

On Tuesday, Secretary of Homeland Security Kirstjen Nielsen and a companion were hounded out of the MXDC Cocina Mexicana by jeering protesters, organized by Democratic Socialists of America members, who shouted “shame” and berated her for the policy to tearing migrant children away from parents.

Some conservative pundits have objected to these restaurant tauntings, calling them fascist:

The comparison with fascism is nonsensical. Nielsen and Miller are major agents of the state that are pushing a policy that is traumatizing thousands of children. The protests were a peaceful expression of free speech. It’s noteworthy that the spokesperson for the Department of Homeland Security acknowledged that the protesters had legitimate concerns:

The most heartening fact about the family separation saga is that American civil society has revolted against the policy. There has been a massive public outcry, which has included even from corporations like the major airlines (which are refusing to fly migrant kids separated from their parents). The restaurant heckling is very much part of this resistance from civil society: