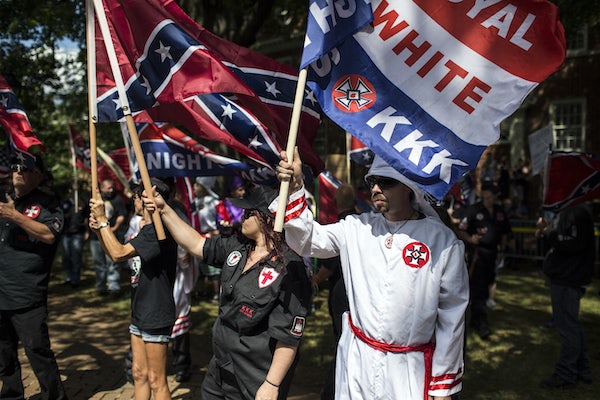 In Trump’s America, the ACLU takes a new approach to free speech.

According to a memo leaked to the The Wall Street Journal, the ACLU has begun shifting its stalwart stance on the First Amendment, in recognition of the surge of hate speech that has accompanied the president’s rise to power. “Our position in one area can sometimes present a conflict with our work and goals in another area,” the memo says. “Work to protect speech rights may raise tensions with racial justice, reproductive freedom, or a myriad of other rights, where the content of the speech we seek to protect conflicts with our policies on those matters, and/or otherwise is directed at menacing vulnerable groups or individuals.”

The organization has been grappling with its position on free speech over the past year, after its clients, the white supremacist groups at the “Unite the Right” rally in Charlottesville in August 2017, started the violence that led to the death of Heather Heyer. At the time, the ACLU decided that it would no longer defend armed hate groups, a position this memo solidifies.

While the U.S. continues to be more tolerant of offensive speech than the rest of the world, with 71 percent of Americans believing they should be allowed to say what they want, there are generational differences. Forty percent of millennials, according to a Pew Research Center poll in 2015, think the government should be allowed to prevent speech that is offensive to minority groups.

As The New Republic’s Sarah Jones wrote last year, Trump’s presidency “supports the notion that no law, even when it is enshrined in the Constitution, can alone justify an absolute position on free speech. That position has to be bolstered by cultural norms, including a consensus that the president must not legitimize and amplify the speech of those who openly bear the swastika and believe that other races are inferior to the white race. Free speech isn’t a pure and abstract good. Like all civil liberties, it is shaped by the context in which it occurs.”