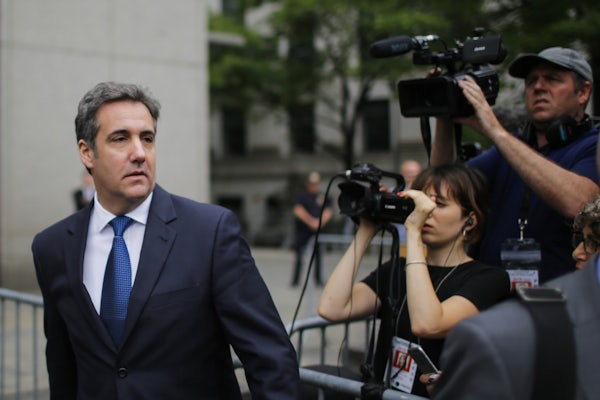 It’s long been known that the president loves to cultivate the tabloid press and has a relationship with David Pecker, chief executive of American Media Inc. (AMI), which owns National Enquirer and many other supermarket periodicals. But a new article in The Washington Post adds many more details to our knowledge of this relationship. “During the presidential campaign, National Enquirer executives sent digital copies of the tabloid’s articles and cover images related to Donald Trump and his political opponents to Trump’s attorney Michael Cohen in advance of publication,” the Post reports. “Although the company strongly denies ever sharing such material before publication, these three individuals say the sharing of material continued after Trump took office.”

Trump and his cronies would, it appears, often tweak the Enquirer’s coverage, in ways small (suggesting alternative photos) and big (advocating story ideas). In particular, Trump encouraged the tabloid in 2016 to cover the health of his opponent Hillary Clinton. In September 2015, the Enquirer ran a story saying Hillary Clinton had six months to live. (Nearly three years later, Clinton still walks the earth).

Of course, since National Enquirer is a purveyor of “fake news” (to use one of Trump’s favorite phrases) it could be argued that the impact of these stories was minimal. But the Enquirer connection is important because it’s a prime example of one of the hallmarks of Trumpism, the tendency to blur the lines between truth and fiction to create an enveloping unreality that hampers criticism of the president.

The Enquirer link is also vital to ongoing investigations into the role Michael Cohen, the president’s former attorney, played in covering up stories. As the Post reports, the FBI is trying to unravel the threads connecting Cohen with AMI, Pecker, and Dylan Howard, the chief content officer of the Enquirer:

An FBI raid executed April 8 on Cohen’s office and residences sought all of the lawyer’s records of communications with AMI, Pecker and Howard regarding two women who claimed to have had affairs with Trump while he was married, according to three people familiar with the investigation. The search warrant served on Cohen also sought all communications he had with Trump or the Trump campaign about any “negative publicity” that might arise during the presidential race, according to a person familiar with investigators’ work. The warrant sought all his communication about an embarrassing “Access Hollywood” tape that surfaced in October 2016, weeks before the election.