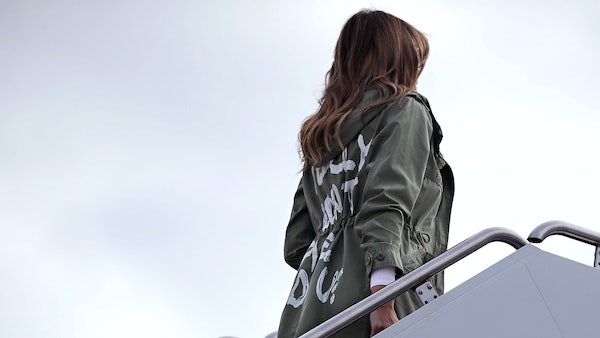 Is Melania Trump having a Britney Spears moment?

There have been so many baffling moments in this presidency that it would seem fruitless to single out one moment as more baffling than the rest; it is as if the country is in a constant fugue state, losing its grasp on what it is. But there was something about the latest controversy surrounding Melania Trump—in which she wore an army fatigue coat emblazoned with the inscription “I REALLY DON’T CARE, DO U?” to visit detained immigrant children in Texas—that was so mystifying that it scaled new heights of strange. If we accept the premise that she wore the coat on purpose (and in this hyper-image-conscious age, how could it be otherwise?), then why did she do it? Does she, simply, not care about children separated from their families? Quite possibly. Was it a message to the “fake news media,” as her husband claimed? Probably not. Was it a coded cry for help, the latest in a shadow campaign to “free Melania”? Well, she doesn’t seem to be going anywhere.

Part of the mystery springs from Melania herself, who is even more unknowable than the average celebrity, not only sheathed in her high cheekbones and glistening skin and oversized sunglasses, but also obscured by the bloodless way she goes about the usual duties of the first lady. What does Melania Trump care about? What are her desires? Who is she, really? No one outside her inner circle can say with any certainty, which leads to wildly different interpretations of her actions. She hates her husband; no, she’s his willing accomplice. She is a simple, decent woman caught up in a life she never wanted; no, she’s a greedy vixen who thinks only of preserving her own wealth and status. She had a procedure to treat her kidney; no, she had plastic surgery. She is so inscrutable, so much like a wax model, that a leading conspiracy suggested that Melania had a body double stand in for her at an event in October.

She is, in other words, a blank canvas, and what we make of Melania says as much about ourselves as it does her. And perhaps, to throw yet another theory out there, that is what the coat was a response to. At a certain point the celebrity loses control of her identity—she becomes the outlandish amalgamation of what the media and the public have pieced together. In extreme cases, such as when Britney Spears shaved her hair or when Shia LaBeouf wore a bag over his head that read “I am not famous anymore,” the celebrity strikes at her own image, which is no longer hers. It is a way of saying: I am still here.

What’s intriguing is that the image Melania has shattered is that of the first lady she is supposed to be: regal, dignified, compassionate, motherly. It was a $39 coat from Zara, faux-spray-painted, consumer trash. The first part of the message was heartless, the second part—“DO U?”—pure cynicism. She seems to be saying, with the force of a scream, I am not a first lady. But then, in this surreal presidency, we already had that sense.