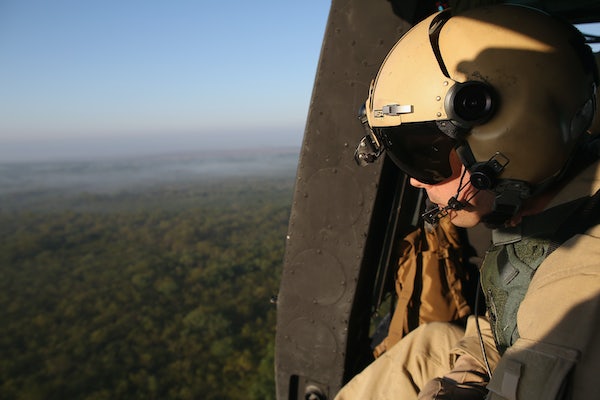 The Washington Post is reporting that the White House wants to move funds allocated to the Coast Guard to immigration control. This comes on the heel of Pentagon leaks revealing that the administration also plans on using military bases to house as many as 20,000 migrant children. (Something Obama did on a smaller scale—7,000—in 2014.) According to a report in The New York Times, “The 20,000 beds at bases in Texas and Arkansas would house ‘unaccompanied alien children,’ said a Pentagon spokesman, Lt. Col. Michael Andrews, although other federal agencies provided conflicting explanations about how the shelters would be used and who would be housed there.”

Both policy moves, however chaotic and inchoate they might still be, are outgrowths of a larger fact about the Trump administration’s foreign policy: the president sees immigration as one of America’s major foreign policy challenges, one that falls under the purview of the military. Unlike Obama’s use of military bases, this policy fits solidly within the trend line of Trump’s broader vision, including using a military budget for a border wall or using the military until such a wall could be built. Viewing migrants as a threat is part and parcel of Trump’s larger unilateralist vision, with its drawing back from traditional alliances and push for trade war.

Trump wants to create a fortress America. To do so, the United States has to shift resources from protecting allies. Hence Trump’s eagerness to make a deal with North Korea that would include ending military exercises. Also tied to this global withdrawal is his weakening of the Atlantic alliance, evidenced by his constant passive-aggressive denigration of NATO and accusations that traditional allies are exploiting the United States.

While Trump has no grand strategy, he does have consistent instincts. Those instincts include the gut belief that America’s security depends on focusing on the alleged problem of immigration and scaling back global commitments. These are two prongs of the same underlying agenda.