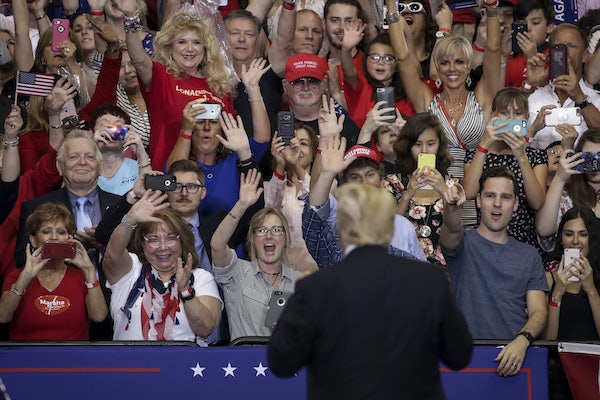 Does criticizing Trump make his base like him more?

In an in-depth piece published Saturday, Times reporter Jeremy W. Peters argued that criticisms of President Trump only make Republicans who have doubts about the president like him more. His opening example was Gina Anders, a Virginia resident. “Gina Anders knows the feeling well by now,” Peters began. “President Trump says or does something that triggers a spasm of outrage. She doesn’t necessarily agree with how he handled the situation. She gets why people are upset.” Using Anders as an example only makes sense if she’s a persuadable voter who could, potentially, leave the Republican Party. But as several critics pointed out on Twitter, Anders is in fact a right-wing activist with a history of supporting confederate monuments, the Tea Party and Ron Paul. In other words, it’s hardly surprising that she’s sticking with Donald Trump.

Responding to these critiques, Peters tweeted:

This answer seems less than satisfying given the ample evidence that Ron Paul libertarianism was a gateway to Trumpism.

These sorts of debates regarding descriptions of voters in stories have happened before. Just a week before Peters’ article, S.E. Cupp wrote in the Times describing Wisconsin resident Amy Maurer as the type of woman “the Clinton campaign aimed ads at.” The article had to be revised to include the correction that “Ms. Maurer is a Republican Party official in Kenosha County; that information should have been included with her comments.” Another article in The New York Post has similarly fudged Maurer’s partisan affiliation to make the same point.

At issue here is the risk of misreading the political landscape. The voters who are sticking with Trump are hard-core partisans like Anders and Maurer. But there might be another class of marginal Republicans who are wavering in their commitment or who have abandoned the party altogether. Deep in his article, Peters notes, “There is some evidence that Mr. Trump’s base of support may have shrunk slightly, though. In recent polls from Gallup and Morning Consult, the numbers of people who identified as Republicans were about 2 percentage points smaller than they were in early 2017.” It might be more illuminating to interview those who are leaving the Republican Party to figure out who the real persuadable voters are.

The danger of focusing on hardened militants is that it makes it seem like there are few if any persuadable voters. That was the lesson I myself hastily drew, until I received a useful rebuttal from The Washington Post’s Greg Sargent:

Given the depth of partisan polarization documented in these articles, it’s tempting to fall back on the idea that parties should focus their energy on mobilizing the base. The more intriguing possibility, as Sargent points out, is that while die-hard voters on either side are tough converts, there’s a broad middle band of voters politicians might focus on reaching.