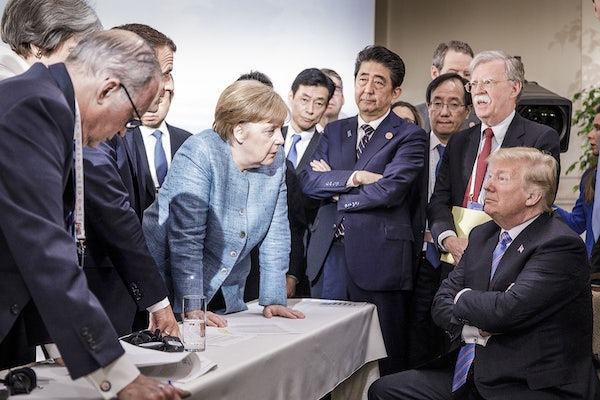 Angela Merkel is lucky to have Trump as an enemy.

While the president has criticized regime-change foreign policies carried out by his predecessors, Trump himself isn’t above trying to unseat a hostile government. Last Thursday, The Huffington Post gathered evidence suggesting that Trump and his ideological allies in Washington had a concerted effort to use the current German political crisis to drive German Chancellor Angela Merkel from power.

“President Donald Trump’s attacks on Twitter against German Chancellor Angela Merkel this week provided the clearest evidence yet of a sprawling American campaign to undermine her,” The Huffington Post argued. “Merkel now has to contend with not only local opponents but also a network of influential anti-immigrant Americans and other international activists inspired by Trump and similar illiberal leaders, like Hungary’s Viktor Orban and Russia’s Vladimir Putin.” America’s ambassador to Germany, Richard Grenell, has been particularly active in this effort to, in his own words, “empower” populist forces.

Working to defeat the government of a democratically elected country is not without precedent, particularly in the Cold War era. In the early 1960s, President John F. Kennedy worked hard to oust the Canadian Prime Minister John Diefenbaker, seen as too resistant to America’s hawkish foreign policy. Still, Kennedy worked covertly, while Trump, as his his tendency, is bluntly obvious about his goal.

Trump is so unpopular in Germany that his opposition to Merkel is strengthening her. “Chancellor Merkel still has an approval rating of 64 percent; she is by far Germany’s most respected politician,” novelist Jagoda Marinic notes in The New York Times. “And she’s on an upswing: People here love the idea of her standing up to Mr. Trump — she got a boost after a photo of her towering over him at the G-7 summit went viral.” This parallels the recent rise in popularity of another politician who sparred with Trump, Canadian Prime Minister Justin Trudeau.

The problem with Trump’s regime change agenda is that to work he needs the soft power that comes with popularity. Domestically, he still has some of that power since the Republican Party is still loyal to him. But abroad, the agenda of “America First” is, for obvious reasons, a hard sell.