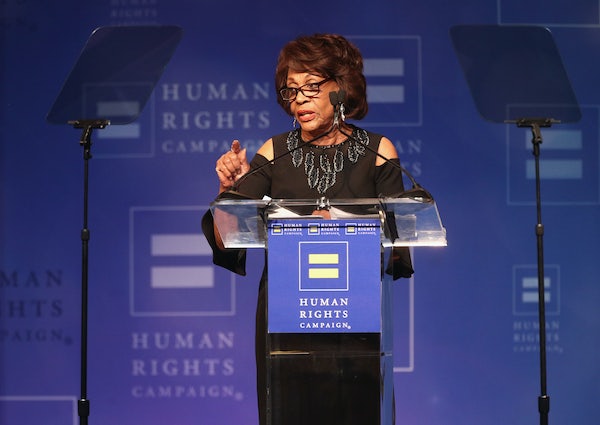 Trump escalates with an attack on Maxine Waters.

In an event on Saturday, California Congresswoman Maxine Waters advocated the harassment of Trump administration officials. “And if you see anybody from that Cabinet in a restaurant, in a department store, at a gasoline station, you get out and you create a crowd,” she said. “And you push back on them. And you tell them they’re not welcome anymore, anywhere.” She added: “The people are going to turn on them. They’re going to protest. They’re going to absolutely harass them until they decide that they’re going to tell the President, ‘No, I can’t hang with you.’”

Waters’s words were ambiguously worded and she should have made clear that she was calling for non-violent protests. For that reason, House Minority Leader Nancy Pelosi criticized Waters comments in a tweet. On Monday, President Donald Trump pushed beyond the ambiguity and escalated the controversy with his own Twitter response:

Trump’s tweet combined racism (“low IQ person”) with a conflation of verbal harassment with “harm.” He also falsely claims Waters was calling on a campaign against Trump’s supporters, as opposed to Trump administration officials. The final sentence of the tweet seemed to be an implied threat.

Trump supporters are picking up on the implications of the tweet and circulating Waters’s home address:

Whatever criticisms one can make of Waters’s original comments, the president is ratcheting up hostility in a way that could lead to violence.