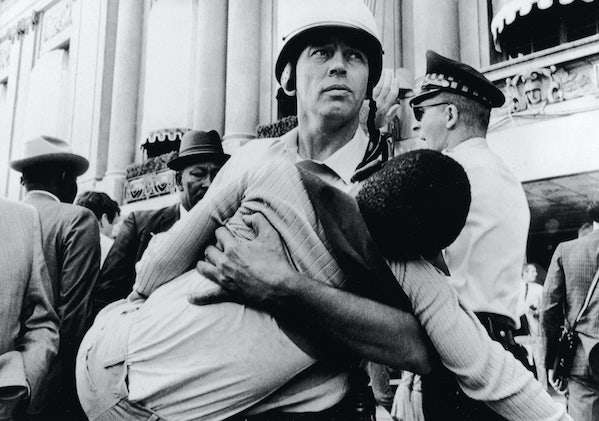 On the civility debate and forgetting the ’70s.

David Gergen, the genial centrist wiseman whose has served as high counsellor to presidents of both parties, argued on CNN on Monday night that the recent surge of anti-Trump protests was disruptive than the political protests of the 1960s and 1970s. “It is extraordinarily divisive,” Gergen said. The anti-war movement in Vietnam, the civil rights movement in the 1960s and early ’70s, both of those were more civil in tone. Even the anti-war movement was more civil in tone but certainly the civil rights movement among the people who were protesting.”

Nor is Gergen alone in thinking this. Politico ran an article arguing that “In the Donald Trump era, the left is as aggressively confrontational as at any time in recent memory.”

These claims are so at odds with easily verifiable history that it’s hard to know what to do with them. Historians have taken to Twitter to document just how wrong it is to remember the 1960s and 1970s as a period of greater civility.

As Harvard University’s Stuart Schrader noted, between 1965 and 1970 there were 1,391 bombings, shootings and attacks in the United States, many of them outgrowths of the anti-war movement and civil rights struggle:

Bombings were alarming common in the era:

In 1968, Secretary of State Dean Rusk was confronted by a crowd in San Francisco yelling “Dean Rusk: Wanted for Murder.”

The re-writing of history to make current protests seem like outliers is based on a complete whitewashing not just of history but of memory. After all, David Gergen was born in 1942 so he was an adult all through the 1960s. But he’s chosen to willfully forget the period he lived through in order to bash contemporary protesters.