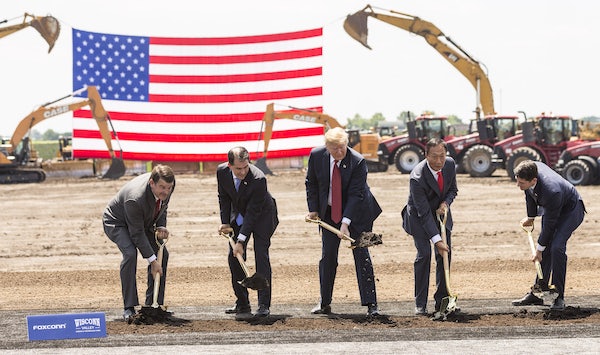 After tweeting a testy goodbye to Milwaukee-based Harley-Davidson, which earlier this week announced its plan to move to Europe, President Donald Trump on Thursday picked up a shovel at the groundbreaking ceremony for a Foxconn plant construction site just 30 miles south of the motorcycle production company.

Trump also tweeted on Thursday morning that the Foxconn deal would bring 15,000 jobs into Wisconsin. Critics of the Foxconn plant hype have long been skeptical of these sorts of stats. At a 2.9 percent unemployment rate, the Badger state might not have enough workers to reap the economic benefits the new high-tech plant promises.

Republican Wisconsin Governor Scott Walker has already admitted that Wisconsin “need[s] more bodies.” In February he signed a bill to fund a $6.8 million advertising campaign to lure young workers into Wisconsin, precisely for the purpose of filling jobs at projects like Foxconn. Wisconsin’s potential human resource shortage has been a topic of conversation even before Foxconn’s 2017 announcement that it would open the plant; it certainly seemed to be on Walker’s mind in 2015, when he attempted to change the University of Wisconsin system’s mission statement. In place of an age-old mission to “severe and stimulate society,” he proposed a vocational goal: “to meet the state’s workforce needs.”

The incentive package for Foxconn will cost Wisconsin taxpayers $3 billion. A recent Marquette poll shows that 46 percent of Wisconsinites think their state is pouring more money into the plant than it is worth, compared to 40 percent who thinks it will “provide at least as much value.” Couple the potential lack of workforce with recent reports about harsh working conditions at Foxconn factories, and the Foxconn plant could easily look like a risky bet. Walker is up for re-election in 2018: Presumably, he must think the benefits, which at this point at least are largely optical, outweigh the risks.