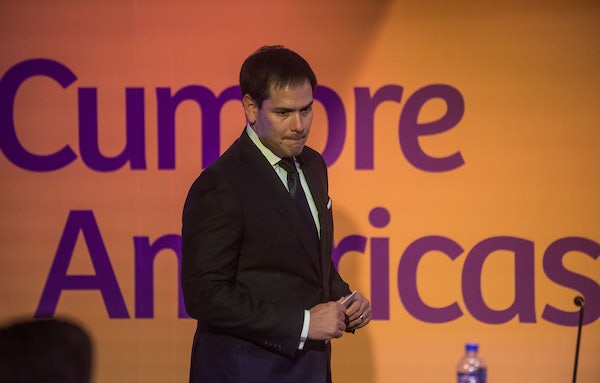 Marco Rubio doesn’t like it when people report other people using the F-bomb.

The Florida Senator keeps hearing and reading swearing in media and he’s not happy with it. Friday morning he tweeted:

It’s easy to dismiss Rubio’s concern as pettifogging. Rubio was responding to a CNN interview with a survivor of the shooting at the  Annapolis Capital Gazette where the swearing wasn’t bleeped out. But surely the horror of the shooting is greater than the words used, which are worth hearing since they convey the grief and anger of the survivor.

It is true that the question of whether to report swearing is a vexed one. The New York Times is famously prudish, preferring whenever possible to use euphemisms.  During the Watergate era, when tapes revealed that President Richard Nixon and his staff swore like sailors, the Times and other newspapers started peppering their transcriptions with the phrase “expletive deleted.” As the historian Rick Perlstein noted in his 2014 book The Invisible Bridge, “And the fact the president swore so damned much. That seemed to shock a blushing nation most of all.” Newspaper columnist Joseph Alsop claimed that reading the transcripts, even with the naughty words recorded as “expletive deleted” filled him with “sheer flesh-crawling revulsion.”

But in our more profane era, even The New York Times is becoming saltier. In 2017, the Times bluntly reported that Anthony Scaramucci, then working as White House communication director, told a reporter that “I’m not Steve Bannon. I’m not trying to suck my own cock.” Explaining the decision, Cliff Levy, the newspaper’s deputy managing editor for digital, wrote:

The Times published Mr. Scaramucci’s profanity after top editors, including our executive editor, Dean Baquet, discussed whether it was proper. We decided that it was newsworthy that a top aide to President Trump used such language.

We also knew that many of our readers would want to know what Mr. Scaramucci said, and we did not want them to have to search elsewhere to find out.

With even The New York Times now printing obscenities, Marco Rubio is going to have to carry around smelling salt.