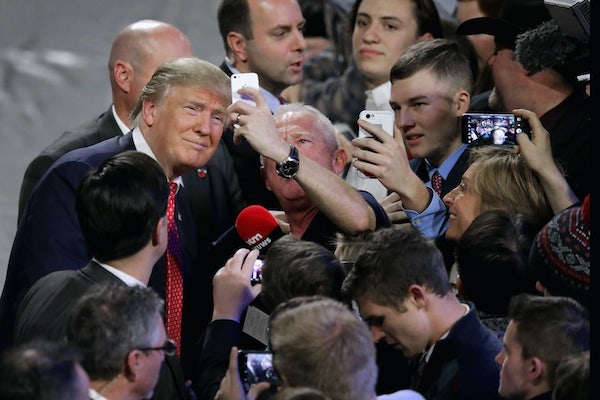 Many analysts on the left and right have been puzzled by the fact that Republican voters who profess to support family values are passionately devoted to President Trump, a twice-divorced, thrice married man with a long history of brazen infidelity and multiple accusations of serious sexual misconduct. How could voters who profess to care about morality love a President who infamously boasted that “when you’re a star, they let you do it...Grab ’em by the pussy. You can do anything.”

Matthew Schmitz, senior editor at First Things, the leading intellectual journal of the religious right, thinks he has an answer to this conundrum. Trump, Schmitz argues in a New York Times op-ed that was posted on Sunday, embodies the “purple” family “found among working-class whites, blacks and Hispanics.”  As against the “red” family values that prize fidelity in marriage or the “blue” family values that uphold companionship, “purple” family values are, we’re told, messier. “In these families, bonds between mothers and children are prized above those between couples,” Schmitz argues. “Unstable relationships are the norm, and fathers quickly end up out of the picture.”

Trump’s chaotic personal life, by this account, mirrors the complexity of purple families:

Baffling as it may be to elites, Mr. Trump embodies a real if imperfect model of family values. People familiar with the purple family model tend to view his alienation from his children’s mother as normal and his closeness to his children as exceptional and admirable. I saw this among my acquaintances in Nebraska. Even those from red families were more likely than my acquaintances in New York to know someone who has had a child out of wedlock or is subject to a restraining order.

The tiny kernel of truth in Schmitz’s argument is that in an age where blended families are increasingly the norm, Trump’s three marriages might seem familiar to many Americans, including religious believers.

But Schmitz’s argument goes beyond the pervasiveness of out of wedlock birth, divorce and re-marriage and encompasses abuse (“subject to restraining order”). While indulgence towards alternative lifestyles might be on the rise, it’s absurd to argue that domestic abuse is a family value. This applies to Trump’s own misconduct. Bragging about being able to grab women by the genitalia is not a quirky cultural difference, but an abuse of power.

Schmitz’s class explanation makes no sense on a number of counts. Trump is not working class. He was born to great wealth and has been a celebrity for many decades. Indeed, Trump’s behavior, if we’re using class analysis, is that of the pampered tycoon who can break social norms with impunity.

Trump is the real life counterpart of F. Scott Fitzgerald’s Tom Buchanan from The Great Gatsby. About Buchanan and his wife Daisy, Fitzgerald wrote, “They were careless people, Tom and Daisy – they smashed up things and creatures and then retreated back into their money or their vast carelessness, or whatever it was that kept them together and let other people clean up the mess they had made.”

If the supposed purple family values explains why Trump’s supporter indulge his heterodox private life, then why is there a racial divide among the working class? Why is Trump much more popular with the white working class than among working class people of color? For that matter, why are Trump supporters not so open-minded about the marital complications of Bill and Hillary Clinton.

Purple family values is an unnecessarily complicated theory to describe something much easier to understand in partisan terms. Trump supporters like his politics and for that reason are willing to give him a pass on his personal life, even though they would never do the same for a comparable Democratic president. The same was true, with opposite partisan valiance, of Democrats who supported Bill Clinton or Ted Kennedy.