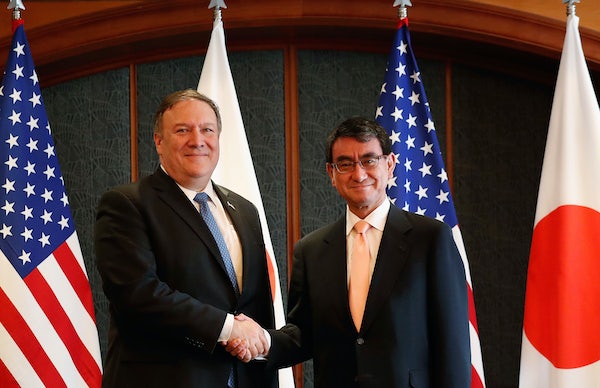 The tweet is in keeping with the Trump administration’s general North Korea policy, which follows the old huckster slogan “fake it till you make it.” In fact, Kim Jong Un has not agreed to the “final, fully verified denuclearization” of North Korea. As MIT political scientist Vipin Narang pointed out, Kim agreed to “work toward the complete denuclearization of the Korean Peninsula.” That’s a very different thing from what Pompeo is claiming.

U.S. intelligence agencies believe that North Korea has increased its production of fuel for nuclear weapons at multiple secret sites in recent months — and that Kim Jong Un may try to hide those facilities as he seeks more concessions in nuclear talks with the Trump administration, U.S. officials told NBC News.

The intelligence assessment, which has not previously been reported, seems to counter the sentiments expressed by President Donald Trump, who tweeted after his historic June 12 summit with Kim that “there was no longer a nuclear threat from North Korea.”

This journalism was bolstered on Sunday by a Wall Street Journal article which reported:

North Korea is completing a major expansion of a key missile-manufacturing plant, said researchers who have examined new satellite imagery of the site, the latest sign Pyongyang is pushing ahead with weapons programs even as the U.S. pressures it to abandon them.

A gulf has opened up between the Trump’s administration’s hyper-optimistic rhetoric about what has already been achieved in talks with North Korea and the reality that there has been no change in North Korean behavior. On Sunday, The New York Times reported that this gulf was causing “a strain inside the administration over how to match promises with realism.” This conflict within the administration is likely to be only a foretaste of the larger problems that will inevitably emerge if, as is likely, Trump’s overblown sales pitch runs ashore of reality. When it turns out that North Korea is not giving up nuclear weapons as Trump has promised they were, the policy whiplash might lead to a hawkish foreign policy that makes the situation even more dangerous than when Trump took up the problem.