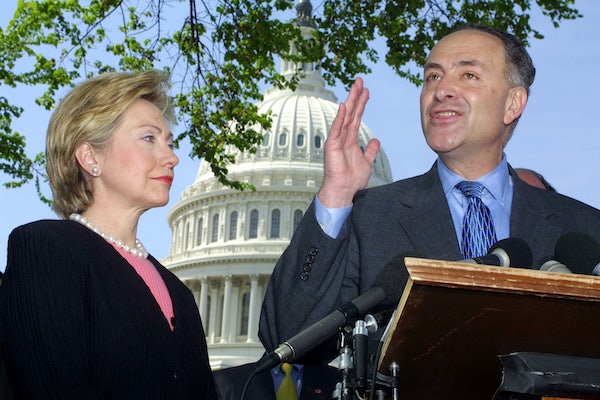 On Monday night, the Senate minority leader was supposed to address constituents at a town hall meeting at Congregation Beth Elohim, a Brooklyn reform synagogue. But, as Raina Lipsitz reports in The Nation, shortly before the meeting was about to start, those registered for it got an email saying the senator had to cancel because he was grounded in upstate New York due to an airplane malfunction.

The milling Democrats at the event, held on a hot evening in an sanctuary without air-conditioning, were already stewing over what they saw as Schumer’s feckless and weak opposition to President Donald Trump. The last-minute cancellation pushed them over the edge.

“He can’t show up in his own district, his own synagogue?” one woman asked. “I don’t believe he has mechanical difficulties,” a man grumbled. “I think he doesn’t have the balls to show up and face us.”

The attempt to placate the angry crowd with the promise of telephone call from Schumer only made them more incensed.

“This is not acceptable,” asserted Liat Olenick, whose group Indivisible Nation BK had helped organize the event. “You can’t literally phone it in.”

That was the moment, in Lipsitz’s account, when things got really strange:

Then, as if by magic, one of the women from Indivisible produced a cardboard cutout of Schumer and placed it on the bimah, the podium in a synagogue from which the Torah is read. People gathered around, snapping cell phone pictures of the women posing with Cardboard Chuck. One woman whispered to another, “We’ve got to get Chuck off of there; the CBE folks aren’t comfortable with photos being taken of him on the bimah.” After a minor scuffle, Cardboard Chuck was moved in front of the bimah.

The frustrated Democrats turned the cardboard cutout into a photographic scapegoat that they could unleash their fury on. They started berating it for its sellout of party principles, its failure to whip the vote against Trump nominees, its unwillingness to support black female candidates, its silence on Israeli human rights abuses and many other derelictions of duty. Cardboard Chuck Schumer heard an earful as the townhall turned into a protest.

After venting, most of the people gathered dispersed. Then the real Chuck Schumer phoned in. Those who remained, according to Lipsitz, listened as “Schumer spent half the call telling the story of how he got into politics. It involved: mediocre basketball skills, perfect SAT scores, and the fact that he went to Harvard.”

Update: Chuck Schumer’s office has since contacted The New Republic to say that, counting those who dialed in from home, some 300 people were on the call with Schumer (prior language in this post suggesting that “few” remained has been corrected accordingly), and that the Harvard story was intended to convey Schumer’s involvement with grassroots activism during the Vietnam War and the lessons it has for how to stop Donald Trump.