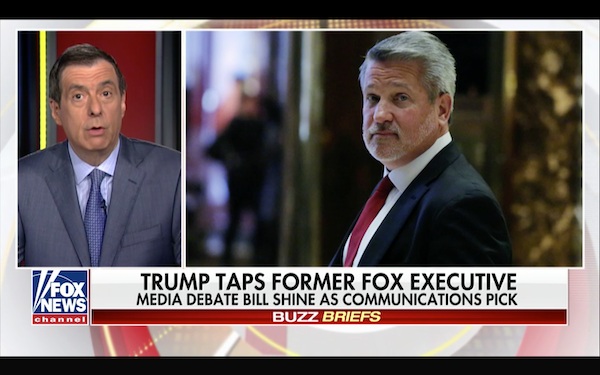 Bill Shine, after being forced out at Fox News, is welcomed by the White House.

Shine resigned last May from his post as co-president of Fox News amid allegations that he enabled the sexual harassment regime of his boss Roger Ailes. So it is shocking, although not at all surprising, that the Trump administration has hired him with the title of assistant to the president and deputy chief of staff for communications.

“It’s extraordinary that the president of the United States could hire someone like this,” a senior Fox News executive told BuzzFeed. “This is someone who is highly knowledgeable of women being cycled through for horrible and degrading behavior by someone who was an absolute monster.”

Even right-wing activists like Larry Klayman, founder of Judicial Watch, are concerned about Shine’s record. Speaking to The Daily Beast, Klayman said, “Mr. Shine has been alleged to have been involved in some way in at least three lawsuits involving sexual harassment of women at Fox News.”

As the Beast reports:

Laurie Luhn, a former Fox News booking director who accused Ailes of serial sexual harassment spanning years, accused Shine of arranging her travel to meet Ailes for clandestine assignations at the Fox chief’s request—all under the guise of “booking meetings.” Luhn has also said that Shine coldly referred her to mental-health professionals for treating the mental breakdowns she suffered as a consequence of Ailes’ abuse. In an interview with New Yorkmagazine, Luhn said that Shine even called her father once in the hopes of having her involuntarily committed to a mental facility.

Shine is also accused of hiring private investigators to harass journalists. A Republican close to the White House told Vanity Fair that “This guy is up to eyeballs in shit.”

The hiring of Shine, done at the recommendation of his former Fox News colleagues Sean Hannity and Bill O’Reilly, testifies to the immense influence of the network over the Donald Trump. It is also further evidence that the administration’s approach to the #MeToo era is willful oblivion.