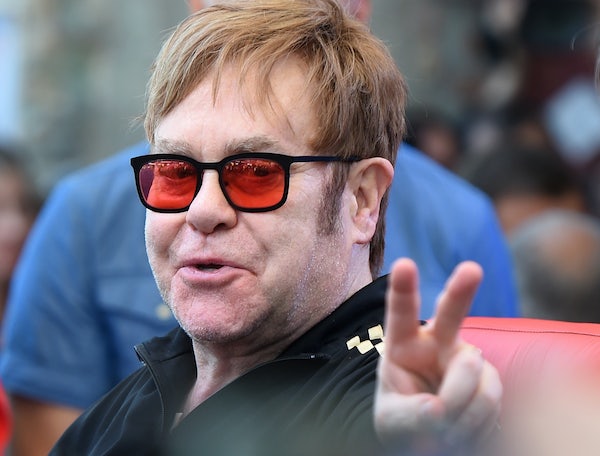 Speaking to his supporters at a rally in Montana last night, the president compared his own ability to draw a crowd with that of the legendary British pop star:

I have broken more Elton John records, he seems to have a lot of records. And I, by the way, I don’t have a musical instrument. I don’t have a guitar or an organ. No organ. Elton has an organ. And lots of other people helping. No we’ve broken a lot of records. We’ve broken virtually every record. Because you know, look I only need this space. They need much more room. For basketball, for hockey and all of the sports, they need a lot of room. We don’t need it. We have people in that space. So we break all of these records. Really we do it without like, the musical instruments. This is the only musical: the mouth. And hopefully the brain attached to the mouth. Right? The brain, more important than the mouth, is the brain. The brain is much more important.

The brain is, indeed, a most important organ. And Trump’s own brain often returns to Elton John.

During the 2016 campaign, Trump often included John’s 1972 song “Rocket Man” as a crowed-pleasing song in rallies. This became so frequent that John himself had to give an interview making clear that he didn’t support Trump. John in fact performed for a Hillary Clinton fundraiser. In January of 2016, Anthony Scaramucci, then a member of Trump’s transition team, falsely claimed that John was going to perform at the inauguration.

Trump later repurposed the phrase “Rocket Man” as a way of insulting North Korean dictator Kim Jong Un. And now that Trump is pursuing a friendlier policy towards Kim, he’s sent him a special gift: