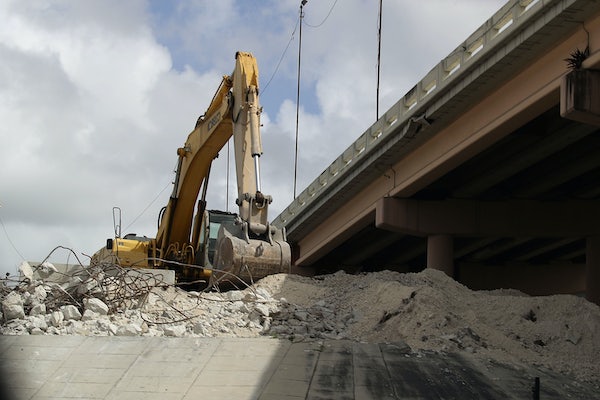 Why Trump will never be an infrastructure president.

As a candidate, Trump boasted about his record as a builder and promised he’d bring about “the biggest and boldest infrastructure investment in American history,” with $1 trillion in spending on “gleaming new roads, bridges, highways, railways and waterways.” This infrastructure pitch was one of the pillars of Trump’s claim to be a different sort of president, a non-ideological dealmaker who could work with both parties.

The hope that Trump would be an infrastructure president has turned out to be a fantasy, for reasons Michael Grunwald explains in a deep-dive investigation in Politico into the stalled efforts to fund the much-needed Gateway tunnel between New Jersey and Manhattan.

Gateway has faltered for two reasons. One is Trump’s temperament: When he couldn’t make a deal with Senate Minority Leader Chuck Schumer to get Democratic support for funding for the Mexican border wall in exchange for Gateway, Trump adopted a vindictive approach to deny Democrats a win. He went from an enthusiastic supporter of Gateway to being intent on sabotaging it.

Trump’s personal grudge fused with the ideological commitments of Republican policy wonks and lawmakers who were loath to spend money on a public project, especially in Democratic states.

Trump might want to be a builder, Grunwald notes, “But inside his administration and much of his party, there’s a genuine belief that the federal government should pay less for public works, especially urban transit projects for Democratic cities in Democratic states.” Those with ties to Trump dating from his pre-political days, Grunwald observes, believe “he truly wants to be a bipartisan builder but that Republican ideologues in Congress and his administration have maneuvered him into a narrow conservative lane.”

As an example of the Trump administration’s preference for private funding solutions, Grunwald points out that “The heads of Trump’s short-lived infrastructure advisory council, his fellow New York developers Richard LeFrak and Steven Roth, once startled Gateway’s backers in a meeting by suggesting New York and New Jersey finance the project by selling off one of the area’s airports.”

A vengeful president who heads a hyper-partisan party ideologically opposed to government spending is unlikely to rebuild America’s infrastructure.