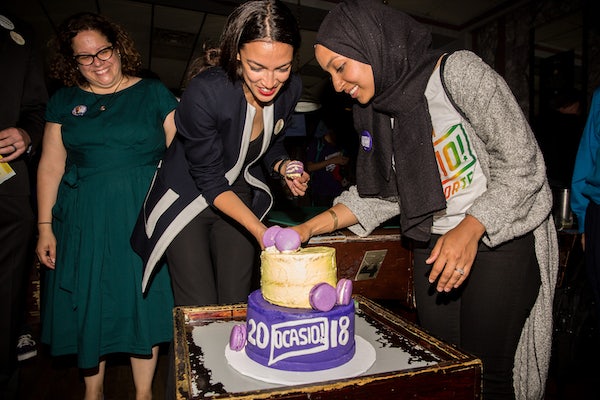 Alexandria Ocasio-Cortez is driving conservatives ’round the bend.

But for conservatives, Ocasio-Cortez isn’t just a rising star but something more ominous, a bogeywoman worthy to join the pantheon including Hillary Clinton, Maxine Waters, and Nancy Pelosi.

Breitbart has devoted nearly 30 articles to documenting Ocasio-Cortez’s alleged perfidy with headlines like “Fact Check: ‘Girl from the Bronx Alexandria Ocasio-Cortez Grew Up in One of Richest U.S. Counties.” National Review describes Ocasio-Cortez as “a chic and photogenic former bartender and Democratic Socialist who advocates for a federal employment guarantee and single-payer Medicare for all” and goes on to link her rise with millennials not having children. For The Washington Free Beacon, there is something childish about Ocasio-Cortez. “Her picture of democratic socialism is all rainbows and unicorns, platitudes and aspirations,” a columnist snorts.

American Conservative columnist Rod Dreher devoted a lengthy post to quoting a long letter from a reader who lives in the district Ocasio-Cortez will be running in. “Ocasio-Cortez’s far-left politics are the future of the Democrats, and if they get their way, America will be well on its way to becoming a third-world banana republic (not that the Republicans are any better),” the reader complains. “Make no mistake.  This country is in big trouble.  There is a lot more I can say about why I’ve come to these conclusions, but in the last three years, I’ve seen enough to believe that some sort of civil war in America is inevitable.”

The reader had elaborate thoughts on how this civil war would unfold: “First, it’ll happen along political lines, and then it will morph into a conflict along racial/ethnic lines.  I expect that we’ll see clashes between right-wing and left-wing groups in the streets that will be very reminiscent of the bloody left/right battles that defined Turkey in the late 70s and early 80s.”

To be sure, Dreher doesn’t endorse this paranoid fantasy that Ocasio-Cortez’s ascension is the beginning of mass bloodshed ending in a race war. But the columnist does offer the letter, from a reader whose writing Dreher describes as “intelligent,” as something meriting a respectful reading.

This sort of conservative reaction is understandable, from a certain perspective. The Democratic politicians who previously served as bogeywomen are now either retired (Hillary Clinton) or in the twilight of their careers (Nancy Pelosi, Maxine Waters). Ocasio-Cortez is young, Hispanic, working class, female, and socialist. Where her supporters see a new hope and a fresh direction for the Left, her critics see a ready-made foil.