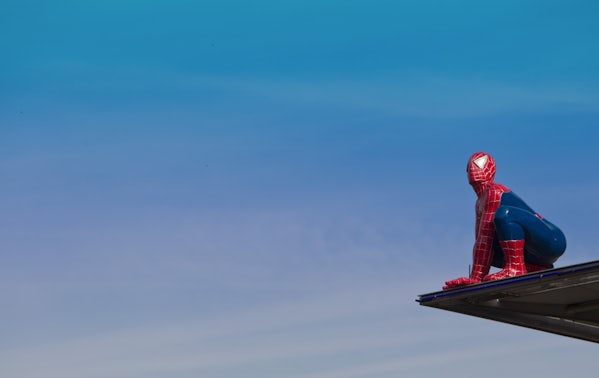 Steve Ditko, the co-creator of Spider-Man and Doctor Strange, is dead.

Ditko lived and died in obscurity, yet evidence of his work is everywhere. Millions, perhaps billions, of images of the superheroes he helped create have proliferated in countless forms all over the world. Yet Ditko lived in the shadows, even more than most cartoonists.

When organized comics fandom started to take off in 1964, at the very period when Ditko was most popular and influential, he attended one comic book convention and decided he didn’t like it. After that, he was notorious for shunning requests for interviews or even photographs, earning the reputation of being the J.D. Salinger or Thomas Pynchon of comics. Yet it’s possible to reconstruct the shape of his life from his published work and occasional essays (which were ocular but full of information if you were willing to work through the thickets of his obscure prose).

He was born in Johnstown, Pennsylvania in 1927, and belonged to the first generation of kids who grew up on super-hero comic books, able to get the adventures of Superman and Wonder Woman for a dime a piece. From the start, Ditko seemed to be drawn to noirish artists who filled the page with black ink to capture the shadowy underworld. His early work bore the influence of Jerry Robinson’s Batman,  Will Eisner’s The Spirit and Joe Kubert’s Hawkman.

Ditko moved to New York in 1950 upon learning that Robinson was teaching at the Cartoonists and Illustrators School  in the city. Robinson became a mentor, getting the intense young student a scholarship and introducing him to an editor at Timely Comics named Stan Lee. By 1953, Ditko was an active freelancer, working in a variety of genres but with a special penchant for horror comics.

He was quick artist, a hard worker and had a distinctive style but he entered the world of comics in a difficult period.  Publishers tended to be sleazy, fly-by-night operations that didn’t always pay. Crime and horror comics were widely criticized as promoting juvenile delinquency. A 1954 Senate investigation led to a purge of the industry, with many of publishers going out of business and most of the surviving firms adopting a strict code of self-censorship.

It’s a mark of Ditko’s commitment to the field that he continued working even as hundreds of artists left the industry for less forbidding pastures. The comics industry limped along until the great super-hero revival of the late 1950s and early 1960s. Ditko, along with writer Stan Lee and writer-artist Jack Kirby, was a key player in the revival, doing a remarkable body of work that created Marvel Comics in its modern form.

Just slightly before the super-hero revival, the trio of Lee, Kirby and Ditko had already assembled at Atlas Comics (the corporate precursor of Marvel) where they specialized in monster comics (essentially Godzilla knock-offs) and supernatural tales. These monster and supernatural comics were a pivotal building block for Marvel Comics, which essentially re-cast monsters as heroes. The Marvel heroes were all really anti-heroes, full of angst, given to fighting each other, and often monstrous in form. During the rebellious 1960s, they became emblems of alienation and social discontent.

Kirby, as creatively fertile a cartoonist as ever lived, was the essential sparkplug, coming up with the basic concepts and designs for the Fantastic Four, the Hulk, Thor, the X-Men, Black Panther, and scores more. Kirby dynamic, muscular art, rich in cosmic space fantasy, also became the bedrock Marvel style, which all the other artists were told to imitate, with one big exception: Steve Ditko.

“Stan wanted Kirby to be Kirby, Ditko to be Ditko...and everyone else to be Kirby,” remembers artist Don Heck, who himself had to evolve from his lush romance comics art to adopting a Kirbyesque two-fisted style.

Ditko was the only Marvel artist given the licence to not draw like Kirby because his signature style -- moody, off-kilter, wirey, and sometimes psychedelic -- possessed an originality that couldn’t be streamlined. Ditko, in the words of historian Sean Howe, “imbued Spider-Man with melancholy soul and Doctor Strange with hallucinatory verve.” At Marvel, Lee brought jazzy verve with his dialogue, Kirby a promethean cosmic imagination, and Ditko an idiosyncratic visual elan.

Marvel Comics had a unique production method. Artists didn’t work from a script, but rather were expected to draw out an issue (sometimes after a discussion with writer/editor Lee) to which dialogue was added after the fact. Especially after the first few issues, Ditko and Kirby were effectively the co-writers, coming up with the story and often providing detailed notes for Lee’s dialogue.

Ditko and Kirby increasingly felt that they were being taken advantage of Lee and by Marvel Comics, since they were not just denied acknowledgement of their role as co-creators but also not given any royalties as Marvel Comics became a licensing bonanza. Ditko and Kirby were mere freelancers as they created characters and stories that would go on to make hundreds of billions of dollars for other people.

For Ditko, who came under the influence of Ayn Rand’s objectivism in the early 1960s, his situation was an intolerable exploitation of creativity.

Ditko quit Marvel comics in 1965. On leaving the company, he wrote a letter to Kirby urging him to quit as well. Unlike Ditko, Kirby had a family so he had to continue working for Marvel, although he also ended up exiting five years later.

After freeing himself from Marvel, Ditko developed a two-pronged career. He started to do personal creative work for fanzines (often self-published or published by friends). These were works he owned himself. Often they were didactic Randian tracts about the importance of private property and the absolute division between good and evil (as in his vigilante series Mr. A).

But Ditko also continued to do commercial work for bigger companies, which he didn’t own. He eventually returned to Marvel as well. But for his commercial work, he never invested in that work the energy and inventiveness he applied to Spider-Man and Doctor Strange. Although done with flair, these were strictly jobs, with his main energy in problem solving the layout of a page.

He continued with his small press publishing until shortly before his death. These quirky personal comics are often enigmatic, reading like parables written in an alien tongue. But there’s a mysterious energy to this work which might win them a posthumous fame, of the sort enjoyed by William Blake or Henry Darger.

As an artist, his lasting influence was among cartoonists working in the tradition of alternative comics and graphic novels: Jaime Hernandez, Gilbert Hernandez, Ben Katchor, Charles Burns and Daniel Clowes.

Ditko changed global popular culture by creating Spider-Man and Doctor Strange but it could be that his real work is yet to be discovered.