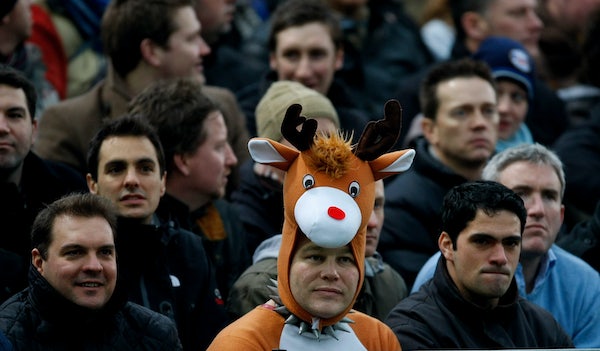 Using thirty years of data from a variety of sources, they conclude, “While rural America watches Duck Dynasty and goes fishing and hunting, urban America watches Modern Family and does yoga in the park. The economically better-off travel the world and seek out ethnic restaurants in their neighborhoods, while the less well-off don’t own a passport and eat at McDonald’s. Conservatives give their boys masculine names like Kurt, while liberals opt for the more feminine-sounding options such as Liam. While men play video games and watch pornography, women browse Pinterest and post pictures on Instagram.”

Many of the tidbits are fun. Defining features of whiteness including watching Rudolph the Red-Nosed Reindeer, Birdman and the Kentucky Derby, owning a flash-light and using Verizon Wireless. More disturbingly, whites are distinctly more likely to believe that police have a right to hit citizens. Liberals are more likely to watch Juno and No Country For Old Men while conservatives are more likely to watch National Treasure: Book of Secrets and Chronicles of Narnia.

The big takeaway from the survey is that Americans aren’t fraying as much on cultural preferences and consumption lines as they are on politics. “The results overall refute the hypothesis of growing cultural divides,” Bertrand and Kamenica conclude.

With few exceptions, the extent of cultural distance has been broadly constant over time. One (unsurprising) exception is that men and women’s time use became more similar from 1965 to 1995; perhaps more surprisingly, there has been no subsequent change in the gender differences in time use over the last 20 years. We also find that differences in social attitudes by political ideology and income have increased since the 1970s. Finally, whites and non-whites have converged somewhat on social attitudes but have diverged in consumer behavior. Nevertheless, our headline result is that for all other demographic divisions and cultural dimensions, cultural distance has been broadly constant over time.

The black/wide gap on consumption seems to be rooted in continued greater homeownership by whites, perhaps exacerbated by the 2008 recession. But the real growing divide is on ideology, with liberals and conservatives further apart on issues like abortion, gay rights, environmentalism, and government efforts to assist African-Americans.  Many of the cultural divisions (liberals preferring The Daily Show, conservatives preferring Fox News) are an outgrowth of this rift. The fraying of America is real, but it is primarily about ideology, not shopping.