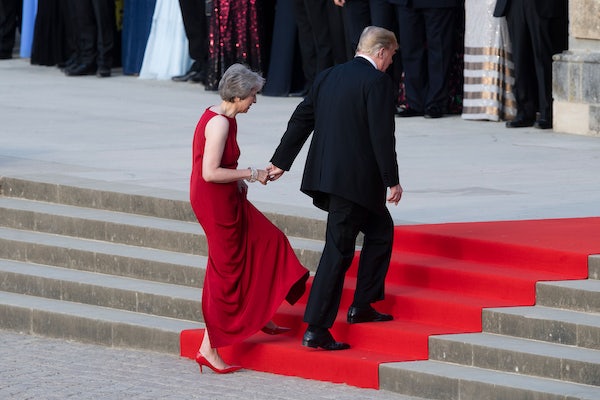 Donald Trump humiliates Theresa May at a moment of vulnerability.

The American president is a disruptive guest in England since his presence is provoking massive protests, including the flying of a giant inflated pig.  Not content with the existing controversy, Trump has decided to throw more oil into the fire in an interview with The Sun.

Trump’s remarks were particularly harmful to British Prime Minister Theresa May, who is an difficult political spot trying to navigate a Brexit compromise while dealing with the resignation of major figures like Boris Johnson, who quit his post as foreign secretary earlier this week.

In this difficult environment, Trump naturally criticized May’s handling of Brexit. “I would have done it much differently,” he told The Sun. “I actually told Theresa May how to do it but she didn’t agree, she didn’t listen to me. She wanted to go a different route. I would actually say that she probably went the opposite way. And that is fine. She should negotiate the best way she knows how. But it is too bad what is going on.”

The president also took the opportunity to praise May’s main rival within her party. “I have a lot of respect for Boris,” Trump gloated. “He obviously likes me, and says very good things about me. I was very saddened to see he was leaving government and I hope he goes back in at some point. I think he is a great representative for your country.”

Queried about Johnson’s prospects, Trump asserted, “Well I am not pitting one against the other. I am just saying I think he would be a great Prime Minister. I think he’s got what it takes.”

Trump also waded into the issue of immigration. “Allowing the immigration to take place in Europe is a shame,” he claimed. “I think it changed the fabric of Europe and, unless you act very quickly, it’s never going to be what it was and I don’t mean that in a positive way. So I think allowing millions and millions of people to come into Europe is very, very sad. I think you are losing your culture.”

Amid the talk of European politics, Trump did have time to comment on his favorite topic: himself. “You know, a poll just came out that I am the most popular person in the history of the Republican Party—92 per cent,” he marveled. “Beating Lincoln. I beat our Honest Abe.”