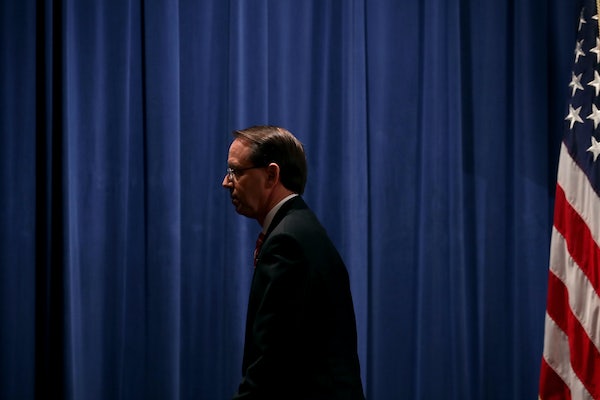 Congressional Republicans are pushing for the impeachment of Rod Rosenstein.

In announcing charges against 12 Russian officials today, Deputy Attorney General Rod Rosenstein tried to frame the ongoing investigation into 2016 election meddling as a non-partisan issue that all Americans should care about. “When we confront foreign interference in American elections, it is important for us to avoid thinking politically as Republicans or Democrats and instead to think patriotically as Americans,” Rosenstein said. “Our response must not depend on which side was victimized.”

If Rosenstein was hoping to get bipartisan buy-in for the Mueller investigation, he isn’t having much luck. Even as Rosenstein made his statement, House Republicans were ramping up efforts to impeach him.

“House Freedom Caucus Chairman Mark Meadows, in fact, had the impeachment document on the floor of the House at the very moment that Rosenstein spoke to reporters and TV cameras Friday,” Politico reports. “Conservative GOP lawmakers have been plotting to remove Rosenstein for weeks, accusing him of slow-walking their probe of FBI agents they’ve accused of bias against President Donald Trump.”

The fact that congressional Republicans are willing to go after Rosenstein after the new indictments might be an indication that they fear the outcome of the Mueller investigation.

Yet Rosenstein’s efforts to win over Republicans wasn’t a complete failure, especially if we look outside Congress. National Review writer David French used the indictments to make a strong argument in support of the investigation. “As Mueller reveals more facts about Russian interference and indicts more individuals for troubling crimes uncovered as part of his entirely legitimate investigation, it’s time for the GOP to tell the president that the hunt needs to continue, because the witches are very real,” French wrote.

Given these disparate responses, it’s likely that as the Mueller investigation proceeds there will be a widening rift on the political right between die-hard Trump loyalists and those willing to follow the evidence where it leads.