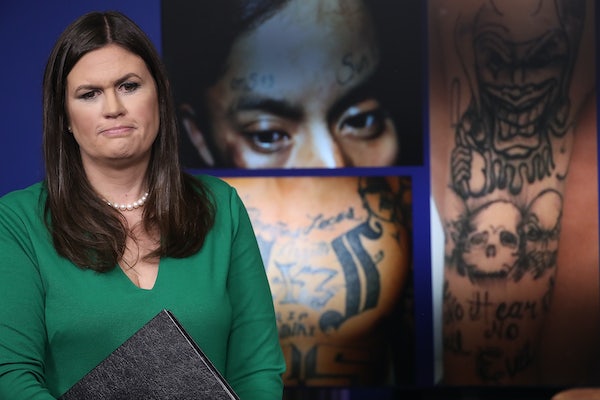 Trump’s fear-mongering about MS-13 is working.

Some members of the gang have been found guilty of disturbing crimes. But the administration has repeatedly exaggerated MS-13’s reach and influence over the past 18 months, drawing false and racialized connections between its crimes and undocumented immigration.

A new poll shows that the administration’s misleading rhetoric is sinking in. The Huffington Post/YouGov survey found that 85 percent of Trump voters and one-third of Clinton voters think the gang is a “very serious” or “somewhat serious” threat to U.S. national security. “A fair share of Trump voters say they are worried about being personally affected by MS-13,” the report found. “About half indicated they are worried a great deal or somewhat that they or a family member will fall victim to MS-13 violence.”

Trump has frequently cast the gang, which originated among Salvadorans in Los Angeles in the 1980s, as a violent threat to American communities writ large. ProPublica immigration reporter Hannah Dreier pointed out that MS-13’s activities are far more limited than the administration’s language suggests. Moreover, the gang largely targets the same people that Trump does with his immigration policies: young Hispanic immigrants, some of whom are undocumented. He has also overstated MS-13’s reach by claiming that ICE has helped liberate entire towns from the gang’s control. (The agency has not done so.)

The poll’s results suggest that fighting MS-13 could continue to be a rallying cry for Trump’s base in the upcoming midterm elections. Whether it will succeed with the electorate as a whole is unclear. Republican candidate Ed Gillespie rolled out a series of attack ads in last year’s Virginia gubernatorial race that accused his Democratic opponent, Ralph Northam, of being soft on MS-13. Polls tightened after the ads went up and Gillespie’s ratings on “law-and-order issues” rose, but Northam ultimately triumphed on Election Day.