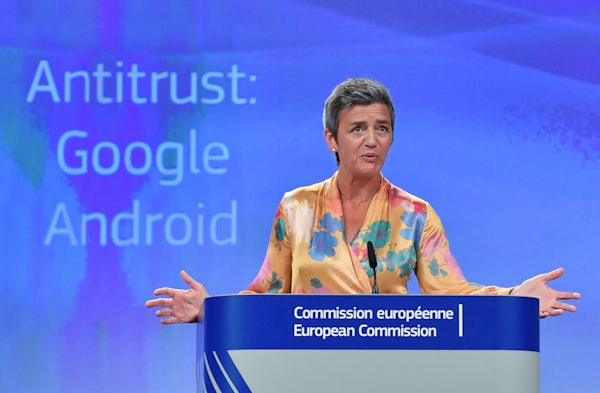 On Tuesday morning, European regulators levied a €4.34 billion fine against Google for abusing its Android operating system, which the EU says the company has used to “cement the dominance of its search engine.” The EU, which claims Android’s market share is as high as 90 percent, cites three ways in which Google—which is now part of Alphabet, a larger conglomerate—abused the operating system. According to the complaint, Google:

If Google does not cease these practices in 90 days, it will “face penalty payments of up to 5% of the average daily worldwide turnover of Alphabet, Google’s parent company.” In 2017, Alphabet’s global revenue was $111 billion. While the 2018 figure will likely be higher, using last year’s revenue such a fine would come out to nearly $5.5 billion, or $15 million per day.

The EU’s argument is fairly simple: Google has, for the last several years, used the fact that its Android operating system is installed in most mobile phones, to further entrench other aspects of its business, notably its applications. In doing so, it has harmed competition by boxing out developers working on competing browsers, search engines, and other applications. A year ago, the EU hit Google with a $2.7 billion fine for using its search engine to illegally privilege its shopping platform.

Shortly after the EU announced the record fine, Google responded by tweeting that they planned on appealing the fine.

The EU’s investigation of Google, which began eight years ago, remains ongoing.