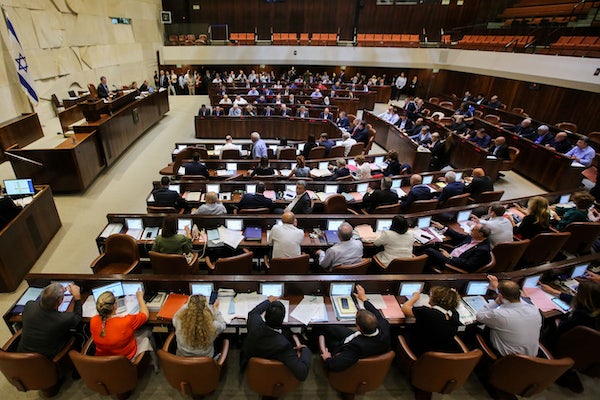 Israel’s parliament voted 62-55 in favor of the long-debated Nation State bill early Thursday morning, enshrining religion-based identity in law. The bill defined Israel as the nation-state of the Jewish people (rather than of Israeli citizens), revokes the status of Arabic as an official language, and affirms Jewish-only settlement as “a national value.”

Knesset (Israeli parliament) members say that the law merely puts the country’s Jewish character into writing. But in actively encouraging Jewish-only settlement, the law elevates the unequal treatment of 1.8 million Arabs with Israeli citizenship—who reports suggest are already discriminated against in employment, social services, and education—to the status of a constitutional norm.

The bill did not pass quietly: thousands of demonstrators gathered for an “emergency rally” in Tel Aviv on Saturday night; 14 American Jewish organizations penned a letter last week to Knesset member Isaac Herzog expressing their opposition to the bill. In a speech at the demonstration, Ayman Odeh, chair of the mostly Arab Joint List party alliance described the law’s purpose as being to “stick a finger in the eyes of a fifth of Israel’s population, spark a dispute and polarize in order to make political gain for the Netanyahu tyranny.” The Joint List party proposed a counter-bill last month that would define Israel as a “state of all its citizens.” The Knesset rejected it.

For decades, the broad appeal of liberal Zionism in America has depended on a supposed equilibrium between the state’s Jewish and democratic values—repeatedly tested by controversies over, for example, the Gaza blockade and associated violence. With this new law, Netanyahu’s government may drive Israel’s liberal supporters further from the fold.