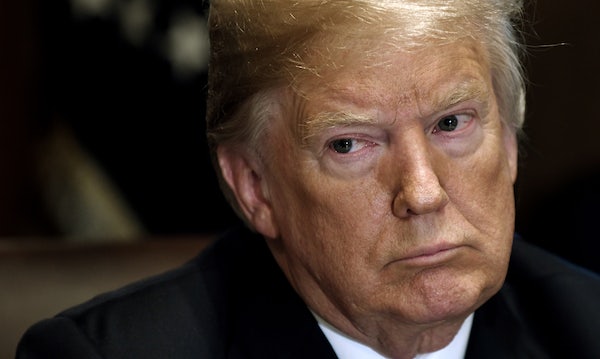 Is Trump really about to enter into a “full-blown trade war” with China?

Axios reports that “top advisers” say that “chances of a longer, wider, more damaging trade war with China are rising.” President Donald Trump slapped $34 billion in tariffs on Chinese goods with “industrially significant technology” on July 6, and on Friday he told CNBC that he’s “ready to go to $500” billion—a number equal to the dollar amount of imports that entered the U.S. from China in 2017. Dow futures slumped 120 points in response to Trump’s comments. All of this adds to the growing threat of what Axios has deemed a “full-blown trade war.”

Larry Kudlow, who leads the president’s economic council, was adamant that the administration would not back down from the threats. “They’re picking the wrong customer, I’ll tell you that—you know how intense [Trump] is on this issue,” he told Mike Allen. “Xi seems to think if he waits out the November elections, Trump will be weakened and therefore will lighten the bite. That’s a very bad bet.”

The trade war between China and the U.S. is not exactly punishing either country yet. At present, the $34 billion in tariffs are insignificant to China and the United States, given that the combined economies of both countries are over $30 trillion. Despite the flashy rhetoric, there is no indication that the administration is ready to immediately go nuclear by slapping an additional $466 billion in tariffs. Instead, if the trade war were to escalate, it would still be done incrementally.

Between the CNBC interview, Kudlow’s comments, and Axios’ report, it’s clear that the administration is doing everything it can to try to convince China—and Trump’s base—that he isn’t bluffing. But right now, this is all pageantry.