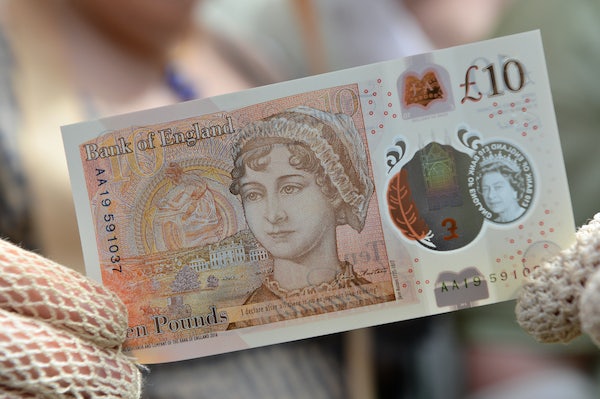 A debauched prince was the first person to buy a Jane Austen novel.

Writing in The New York Times, Jennifer Schuessler reports that a graduate student has uncovered a bill of sales suggesting that in 1811 the very first known sale of the first published Austen novel, Sense and Sensibility, was made by the Prince Regent, who was the de facto monarch of the United Kingdom because his father, George III, was mentally incapacitated. The Prince Regent, who would later become George IV, was the very opposite of a Jane Austen hero. He was infamous for his adulteries, his gluttony, and his constant indebtedness.

The Prince Regent was also notorious for his mistreatment of his wife, Caroline of Brunswick. Once he took the throne, he tried to use Parliament to force a divorce in 1820. Popular opposition to the move prevented Parliament from acting on the monarch’s wishes. Like many other commoners, Jane Austen took the side of Caroline over her husband. “Poor woman, I shall support her as long as I can, because she is a Woman, & because I hate her husband,” Austen wrote in an 1813 letter.

Despite her distaste for the Prince Regent, Austen was compelled by a courtier and her publisher to dedicate her novel Emma (1815) to him. This unwilling dedication suggests a motive for the Prince’s original purchase. He was aware of his general unpopularity and, in the manner traditional of monarchs, wanted to cultivate ties to the arts to win support. If the Prince Regent was hoping that Jane Austen’s popularity would rub off on him, he bet poorly. The dedication of Emma remains a footnote, and George IV, who died in 1830, is remembered as scoundrel.