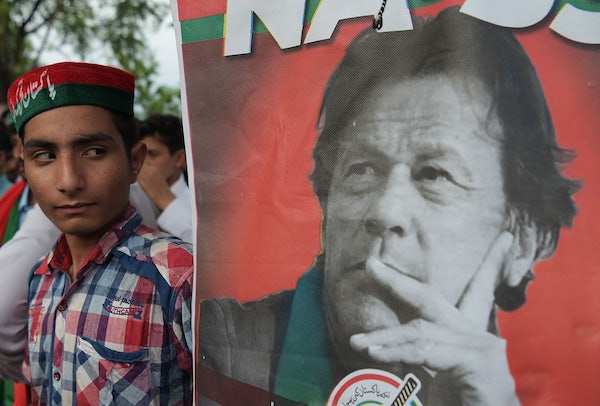 Khan, a legendary cricket star and debonaire playboy, is likely to be the next Prime Minister of Pakistan, even as counting of votes from Wednesday’s election remains unusually slow. By Thursday morning, it appears that Khan will win a plurality in Pakistan’s parliament, which he can augment to majority status by peeling off members of rival parties to join his government.

Khan’s Pakistan Tehreek-e-Insaf (PTI) party won on the promise of cleaning up political corruption. The incumbent Pakistan Muslim League-Nawaz (PML-N) has been wracked by scandals, including a former Prime Minister Nawaz Sharif stealing a fortune from public funds and using it to buy expensive apartments in London for his children.

Yet Khan’s victory is not clean and he will have a difficult time uniting his nation. The election has been bedevilled by violence. As Vox report, “On Sunday, PTI candidate Ikramullah Gandapur was killed by a suicide bomber in an attack that also wounded four others. And earlier this month, a bombing at a political rally in the northwestern town of Mastung killed 151 people and wounded 177 people.”

Equally dangerous for Pakistan’s fragile democracy is the fact that the military was not neutral in the election but clearly pushing for Khan’s victory. A New York Times article notes that “In recent months, army and intelligence officers pressured, threatened and blackmailed politicians from rival parties, human rights groups have said, steadily narrowing Mr. Khan’s competition.”

Khan ran on an ambitious agenda. Aside from anti-corruption, he’s promising a new foreign policy that will be more independent of the United States as Pakistan seeks closer friendship with China and a negotiated peace with Taliban forces in Afghanistan. But the circumstances of Khan’s victory are likely to haunt his government.