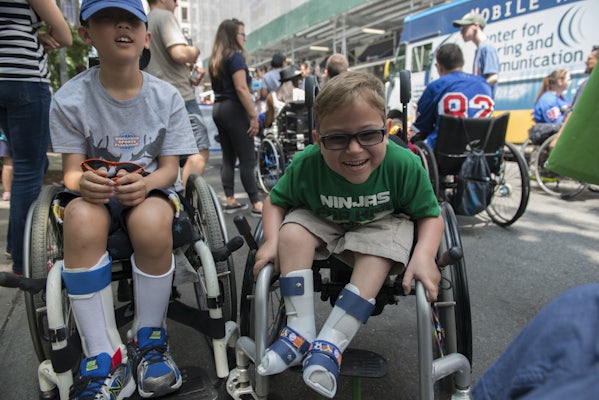 A Republican congressman compared the Americans with Disabilities Act to Jim Crow.

Jason Lewis, a U.S. representative from Minnesota and former talk-radio host, in recent weeks has been exposed for saying on-air that black voters have “an entitlement mentality” and are waging “a racial war” on whites, and that “young single women” who vote based on contraceptive rights “have no cognitive function whatsoever.” On Friday, CNN published a report showing Lewis also opposes civil rights protections for people with disabilities:

The Minnesota congressman’s extreme rhetoric in his previous job, which he described as rooted in libertarianism, also included calling the part of the 1964 Civil Rights Act that applied to private businesses “unconstitutional” as well as calling the Americans with Disabilities Act “one of the worst” laws and suggesting that it might be the cause of workplace shootings. He also said religious freedom laws didn’t “go far in enough in allowing discrimination.”

Lewis also compared the Americans with Disabilities Act to Jim Crow laws that segregated Americans by race. It’s extreme language, but Lewis is hardly the only Republican to express antipathy toward the ADA, which celebrated its 28th anniversary this week.

In February, the GOP House passed a bill to weaken the ADA’s protective provisions. Currently, people with disabilities don’t have to notify businesses before filing suit over a failure to comply with the law, nor do they have to offer businesses a grace period in order to rectify the failure. But the bill, introduced by Republican Ted Poe of Texas, would require disabled patrons to notify businesses in writing of potential ADA violations, and businesses would then have months to respond about the steps they’re taking toward compliance. As ThinkProgress reported at the time, “These provisions would essentially remove any incentives for businesses to comply with the ADA, the ACLU argues, because business owners can theoretically be out of compliance for years and not be penalized for it.” (The bill’s supporters argued that the ADA allowed too many frivolous lawsuits. The bill has been blocked by Democrats in the Senate.)

Attorney General Jeff Sessions has also removed a number of protections for people with disabilities. But opposition to the ADA isn’t entirely partisan. In June, Democratic Representative Lou Correa of California joined a Republican, Representative Ted Budd of California, to spearhead a letter in support of credit unions now facing lawsuits because their websites aren’t accessible to people with certain visual impairments.