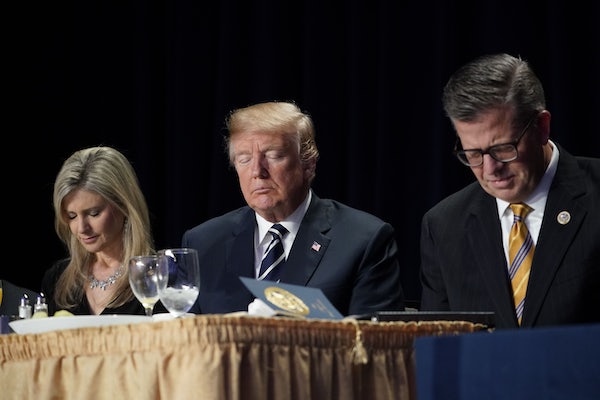 The National Prayer Breakfast is a perfect place for the unsavory to meet the Washington elite.

The arrest of Marina Butina for acting as a Russian agent is putting the spotlight on the annual National Prayer Breakfast, a major Washington ritual to promote Christian fellowship which also serves as a place where dubious figures can hobnob with the high and mighty. Butina used the 2017 Prayer Breakfast to try and arrange a meeting between President Donald Trump and Russian President Vladimir Putin.

As The New York Times reports, “With its relative lack of diplomatic protocols and press coverage, the prayer breakfast setting is ideal for foreign figures who might not otherwise be able to easily get face time with top American officials, because of unsavory reputations or a lack of an official government perch, according to lobbyists who help arrange such trips. They also contend that it is easier to secure visas when the breakfast is listed as a destination.”

The Christian rhetoric of forgiveness and reconciliation deployed at the Prayer Breakfast is perfect tool for lobbyists. In 2016 lobbyist Herman J. Cohen offered the President of Chad Idriss Déby an invitation to the event for $220,000. Cohen promised the event would be “a special occasion to get to know and converse directly with the President of the U.S.”

Déby did not take up the offer but other foreign leaders have found the Prayer Breakfast to be a useful. The New York Times cites one memorable example:

James C. Slattery, a former congressman whose firm was paid more than $1.8 million since 2011 to provide lobbying help for Ms. Tymoshenko, the Ukrainian leader, and her political causes, encouraged her to attend the breakfast. He accompanied her to last year’s event, where she secured a photograph and brief conversation with Mr. Trump, which her allies used to promote her nascent presidential candidacy back home — to the apparent surprise of the White House, and to the chagrin of the sitting Ukrainian president.