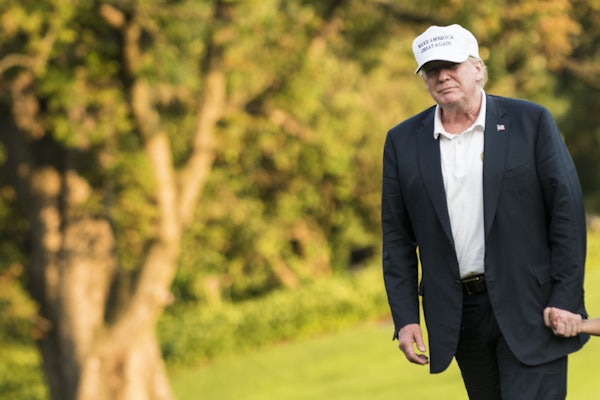 What did the Times’ publisher think would happen in an off-the-record meeting with Trump?

On Sunday, President Donald Trump tweeted a mini-scoop amid his usual tirade about immigration, the economy, and the “witch hunt” being led by special counsel Robert Mueller.

It soon came out that the Times’ 37-year-old publisher, A. G. Sulzberger, and the editor of its opinion section, James Bennet, had been invited to sit down with the president nine days earlier—and agreed to the White House’s demand that it be kept off the record. Although Sulzberger didn’t know the purpose of the meeting when he accepted the invitation, he released a statement saying that he visited with the president “to raise concerns about the president’s deeply troubling anti-press rhetoric.” (When Trump broke the terms of the agreement, the Times followed suit.)

What we know about the meeting, which appears to have been called so that the president could berate the Times publisher for negative coverage, is unsettling. Trump bragged about inventing the term “fake news” and proudly referenced the fact that other countries had taken steps to ban “fake news.” Sulzberger, according to New Yorker editor David Remnick, “replied calmly that such countries were dictatorships and only dictatorships could ban independent inquiry.” Trump also expressed surprise that the Times and other news organizations had only just begun posting armed guards outside their offices.

This outcome was predictable. It’s not clear why Sulzberger would have agreed to a meeting that was so clearly a trap. Trump wanted to use Sulzberger, and by extension the Times, as a punching bag; it was inevitable that he would tweet about it. Perhaps Sulzberger agreed because he recognized that it was a no-win situation—either attend, and become part of the president’s anti-press PR push, or not attend, and be called out for cowardice. But the result has made Sulzberger look out of his depth.