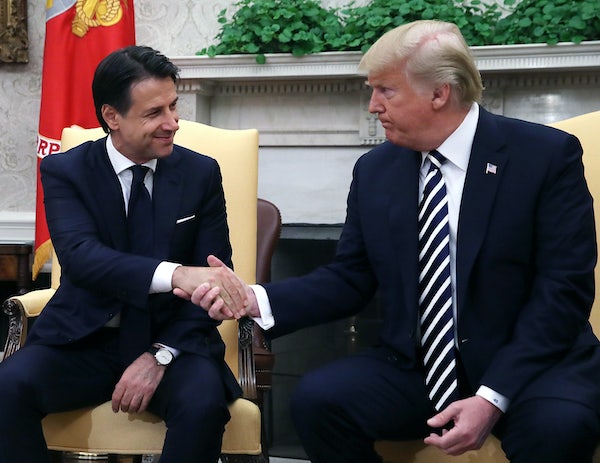 Trump may not like NATO, but he likes ... Italy?

Meeting with newly-elected Italian Prime Minister Giuseppe Conte in the White House, President Trump singled out for commendation Italy’s new tough line on immigration. As a nationalist and populist, Conte has more in common with Trump than most American allies.

“I agree very much with what you are doing with respect to migration, and illegal immigration, and even legal immigration,” Trump said to Conte. “He has taken a very firm stance on the border, a stance that few countries have taken. And frankly he is doing the right thing in my opinion.” These kind words are all the more striking given the fact that Italy, contrary to Trump’s preferred policy, is falling behind in its military spending. They illustrate, perhaps, that nativism is more important to Trump than NATO.

Trump’s warm words for Conte illustrate that the president’s “America First” foreign policy is in practice a policy of building closer ties with governments that share the president’s own politics. As Max Fisher of The New York Times observes, this is a genuine innovation given previous American governments have tried to work with allies of varying political orientation.