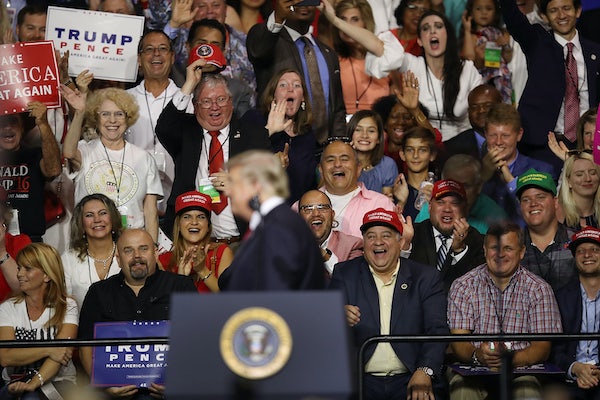 QAnon is a conspiracy theory that Trump can neither embrace nor disavow.

The letter Q was everywhere to be seen at Donald Trump’s Tampa, Florida Rally. It showed up in countless signs and shirts. “Q” is a shorthand for QAnon, an anonymous internet purveyor of pro-Trump conspiracy theories that are gaining traction among the the president’s most vocal fans. The QAnon theories are elaborate and contradictory but at their heart is the idea that Donald Trump is waging a secret war against a cabal of pedophiles who hold positions of power in the government and the media.

As Isaac Stanley-Becker explains in The Washington Post, “In the black hole of conspiracy in which ‘Q’ has plunged its followers, Trump only feigned collusion to create a pretense for the hiring of special counsel Robert S. Mueller III, who is actually working as a ‘white hat,’ or hero, to expose the Democrats. Barack Obama, Hillary Clinton and George Soros are planning a coup — and traffic children in their spare time. J.P. Morgan, the American financier, sank the Titanic.”

QAnon serves an obviously useful function for Trump supporters. It allows them to imagine that his sometimes bizarre acts are in fact part of a covert operation. Further, as a fighter against pedophilia, Trump enjoys the high moral ground against his foes, no matter what else he does.

The curious thing about the QAnon conspiracy theory is that Trump will have a hard time either embracing it or denouncing it. Trump, given his past as a birther, is hardly adverse to conspiracy thinking. But QAnon in its present form would require him to validate Robert Mueller, something the president doesn’t seem inclined to do.

“Pray Trump mentions Q!” a supporter declared on 8chan. But so far, there has been little evidence that Trump is willing to mention Q, since it seems to go a step too far even for him.

But even if Trump doesn’t mention Q, he can still benefit from the flourishing of QAnon. “What Trump doesn’t do is also important,” Philip Bump notes in The Washington Post. “He is always loath to criticize those who stand with him, allegedly asking then-FBI Director James B. Comey to give longtime adviser Michael Flynn a break, or declining to speak forcefully against far-right protesters in Charlottesville or, we can add, refusing to undercut Russian President Vladimir Putin in public. Trump could help stamp out QAnon and other conspiracy theories, but he chooses not to because they often serve his political ends.”