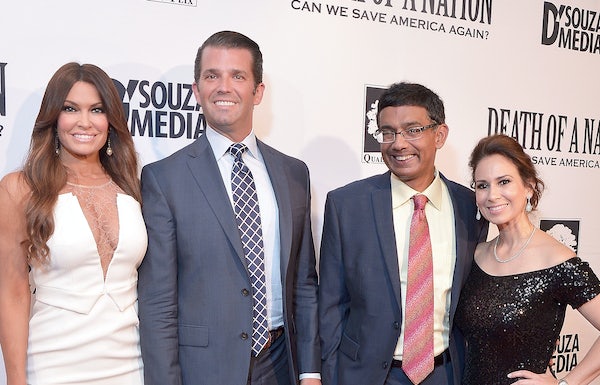 In his new film Death of a Nation, right-wing polemicist Dinesh D’Souza argues that modern “liberals” and leftists (he uses the terms interchangeably) have a strong affinity with Nazism. “Check out the official Nazi platform!” D’Souza blurts out in the film. By his summary it consists of: “Money lenders and profiteers punished by death…State control of media and the press…Seizure of land without compensation…State control of religious expression.” According to D’Souza, “This reads like something jointly written by Elizabeth Warren and Bernie Sanders!”

In the screening of the movie in Washington, DC, D’Souza said, “The movie would appeal immensely to people who really want to know what’s going on and know nothing about it.” He acknowledged that most of the people who would like the film would be “predominantly Republicans and conservatives.”

One Republican conservative who knows “nothing about it” and loved the film, apparently, was the president’s namesake and scion, Donald Trump Jr.

“When you look at the movie, you’ll see that there is a very distinct and clear difference between what actually happened and what is being sold to our youth today,” the president’s son told an interviewer. “You see the Nazi platform from the early 1930s . . . and you look at it compared to the DNC platform of today, you’re saying, ‘Man, those things are awfully similar’ to a point where it’s actually scary. It’s the exact opposite of what you’ve been told.”